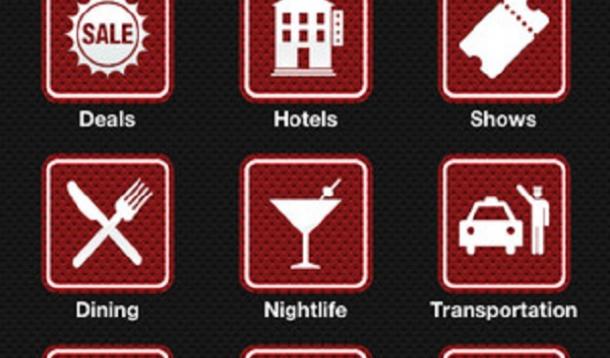 You don't usually hear "saving money" and "Las Vegas" in the same sentence, but a new app can cut down costs for hotels, tours, live events and airfare to and from the Sin City.

Called TravelVegas, the free app for iPhone, iPad and iPod touch is based on the website of the same name.

We took it for a spin and found it lived up to its claim to provide discounts in and around the city.

The app serves up more aggressive deals when it comes to shows and tours — such as 35% off Blue Man Group and 30% off a Hoover Dam tour. Some deals are exclusive to TravelVegas (and its website), while others are not, such as a free glass of wine at the Circus Circus Steakhouse (via Foursquare) or a discounted meal at the Hard Rock or $7.77 for steak and shrimp at Mr. Lucky's.

The app is divided into three sections: Home, Travel Guides, and Favorites:

The Home page has nine large icons to show you discounts in a number of areas, including airfare, hotels, shows, dining, tours, transportation, and so on. Each section has the information presented alphabetically or by location (if you're in Vegas, tap the Map tab). A separate Deals tab highlights the latest offers, also listed alphabetically or by location. Too bad there's no option to list them by how good the deals are by showing the percentage off the base price.

As the name suggests, the Travel Guides section offers about a dozen guides pulled from the TravelVegas website. This includes clearly written information about "Booking a Vegas Vacation," "Cirque du Soleil Show," "Best Hotels in Vegas," "Taxi Tips" and "Family Fun Attractions," to name a few. There are some great suggestions for those on a limited budget, too, including a "Free Things to See" article.

The Favorites tab (yes, this site is from the U.S.) is home to everything you tapped as a "favorite" while perusing the app. For example, if you're planning a trip to Vegas with some friends, you might've tagged a couple of airline options, hotels and shows you're interested in, but haven't yet made a decision. But be aware many of these deals are time sensitive. You can also use the search window on the app to find something by keyword.

Other features of the app include user reviews, an offline mode, a four-day weather forecast, and many high-resolution photos.

TravelVegas isn't optimized for iPad — you'll need to tap the 2x button to expand the app to full screen — so perhaps this is something that can be added in an update.

Overall, this free app is one to keep on your device when planning a trip to Las Vegas as it could save you money — whether you want to pocket the cash or save it for the tables.