But it's also missing a few key ingredients 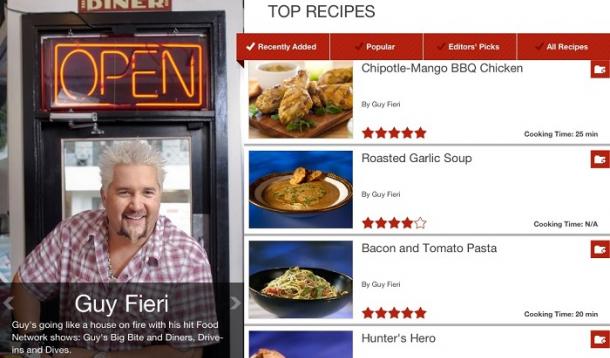 If you spend a lot of time with Guy Fieri, Rachael Ray and Bobby Flay on the boob tube, why not take these chefs into your kitchen via your iPad?

The new and improved Food Network in the Kitchen for iPad adds a number of new features not found in the original app—released in November of 2010—including a fresh new user-interface, recipe comparison tool, user ratings and reviews, and the ability to add notes to recipes.

The app gets it mostly right for foodies looking for something fresh and fun to whip up, but a few missing ingredients means users might still be hungry for more.

At its core, Food Network in the Kitchen features more than 40,000 recipes culled from its various TV shows and personalities. There are three parts to the main menu: Chefs, Collections and Featured recipes by theme (at the timing of writing this, Valentine's Day-related meals and desserts).

All three main areas can be swiped left and right or up and down, so you can tap on one of the large thumbnails for content. Under Chefs, touch the square belonging to Giada De Laurentiis, Paula Deen or Alton Brown, for example, to be taken to their collection of recipes—all of which are then separated into Recently Added, Popular and Editor’s Picks.

The Collections area segregates all of the app's recipes by cuisine (Mexican, Italian, Asian, and so on), by type of food (such as chicken) or other categories (brunch, side dishes, comfort food and quick & easy, to name a few).

Each recipe you land on has a full list of ingredients and directions (with three font sizes to choose from), a photo (tap to expand), total time (prep and cook), yield (number of servings) and difficulty level (easy, medium, difficult). You can now type notes for each recipe, read users ratings (out of five stars) and comments, flag the recipe as a favourite, tap to add the ingredients to a shopping list or share via email, Facebook or Twitter.

Too bad there isn't any nutritional information for each recipe, such as how many calories are in the meal. And you can't change the yield number and have the app automatically recalculate the number of ingredients (say, if you're cooking for five but the yield is for two servings); other cookbook apps have simplified this process for you. Another "beef": there is no option to wirelessly print the recipe, but you can email and then print from a computer, if you like.

Also curiously missing is video. With an app called Food Network in the Kitchen, you'd think there would be many video clips pulled from the various TV shows to see how to pros do it. After all, many other cookbook apps have video—including Jamie Oliver's Recipes, MyRecipes Daily Indulgence and The Big Book of BBQ.

One of the welcome new features, however, is a side-by-side recipe comparison tool. Not sure if you should make Italian Barbequed Chicken with Polenta or Chicken Parmesan? A recipe comparison option lets you look at multiple recipes side by side to make the decision – perhaps based on cook time or what ingredients you already have in the cupboard and fridge.

Finally, there are a few other tools, such as a unit converter (by volume or weight) and five timers (which can be used simultaneously or one at a time).

While not perfect, Food Network in the Kitchen is an appetizing $2 addendum to the TV network, as it houses thousands of recipes from various TV shows and the website into an easy-to-use and attractive digital cookbook. Hopefully the developer will add a few missing ingredients sooner than later—including video—to make the app even more tasty.

Give your sweetheart an iPhone, iPad or iPod touch app that keeps on giving. Well, for two weeks, anyway. 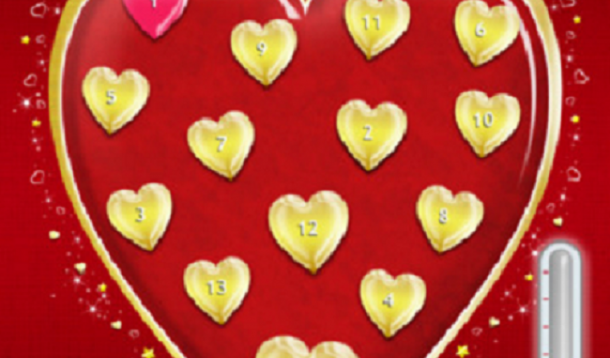 While it won't replace a bouquet of roses or a candlelit dinner, a new Valentine's Day app for iPad unwraps 14 love-themed apps to the person you gift it to.

Aptly named Valentine's Day 2012: 14 best free apps for your love, this app asks you to tap on one of the gold hearts to discover a free, handpicked app to download.

The first one offered was NaturalMotion's My Horse, an app that features a realistic-looking horse to groom, feed, train and compete. You'll get a preview of each recommended app, with a blurb on why it's romantic, and if you want to download it you'll touch the green arrow.

The more you download these digital presents, the more your "love thermometer" will rise. Once the mercury is at its peak you will receive a bonus gift, indicated by a shiny gem, which unlocks something for you. This could be heart-themed wallpaper to use on your digital device or a new song to listen to. Shake the iPad, iPhone or iPod touch to hear a new track.

The second app it recommended was Jamie Oliver's Cooking Recipes, which makes sense, but the thir app was another game, PlayMesh's Valor, a multiplayer city building simulation. Um, not sure how this is a "romantic" game, mind you, but at least it's a highly-rated one with an average user score of 4.5 stars out of 5.

If you try to tap on a gem before it's time, you might get a message that says "Trying to cheat? You have to earn bonuses before you can open them! Open more hearts on the main page and come back." If you go back to the main page and tap on a heart without waiting until the next day you might see a pop-up window like "Hold on a minute…you'll have to wait a bit longer to see what's in this one!" You get the idea.

The free Valentine's Day 2012 is a fun way to get more free apps. The one-a-day giveaway is a clever idea, as is the bonus content, all wrapped in a romantic theme.