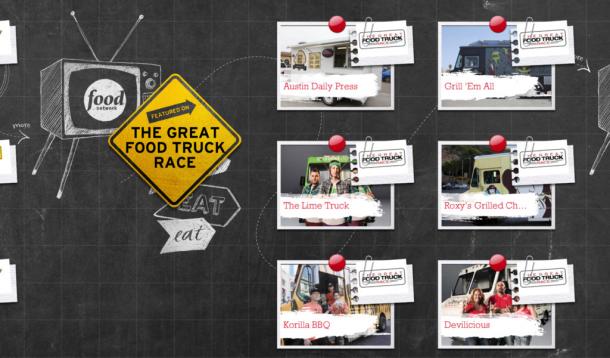 As major fans of Diners, Drive-Ins and Dives — the popular Food Network show starring chef Guy Fieri — my wife and I recently set out to find a restaurant profiled in Las Vegas. The effort was worth it, but finding Yayo Taco wasn't that easy: It required a juggle between a Web search and Google Maps.

A new app called Food Network On the Road makes it a lot easier for television viewers to find restaurants profiled on their favourite shows.

As you'd expect from its name, the free app for iPad, iPhone or iPod touch lets you easily find and bookmark establishments you want to visit, based on various Food Network television shows, personalities or specials. They're not all listed here, mind you, but there are more than 3,000 locations, says Food Network.

You can simply drag and drop a restaurant listing into a Favourites folder at the bottom of the screen. At any time, you can search by host, show name, cuisine, city or restaurant name, or you might opt to browse the app in a few different ways. For instance, you can sift through popular shows such as Boy Meets Grill, Giada's Weekend Getaways, Throwdown With Bobby Flay and more. Or browse listings for popular chefs including Duff Goldman, Alton Brown, Mario Batali and Rachael Ray.

You can also peruse the lists by city, cuisine or "Best Of" rankings. Or tap the "Nearby" tab and you can see if there are any restaurants near you — based on your device's GPS signal — that have been profiled on a Food Network show.

For each establishment, you'll see the address, phone number and directions, along with the location in a small Google Map window. You can read a brief description of the place and even create your own road trip ahead of time — and share it with friends, earn food badges and save places you've already visited.

The interface for the app is clean and easily navigable. But while you can add a photo to a restaurant — by importing it from your photo library or taking it then and there with your iOS device — you can't make notes for each place (such as "order the mahi-mahi" or "ask for Rosie"). Hopefully this will be added to an app update, along with more locations (though there were only two places I couldn't find).

Overall, Food Network On The Road is a delicious app for any on-the-go foodie — especially if you're a fan of the popular television network.