Pets Die, and Sometimes It Sucks to Be the Grownup

I suppose some people would suggest I tell her the truth. But I can’t. Not now. So I plan to lie. 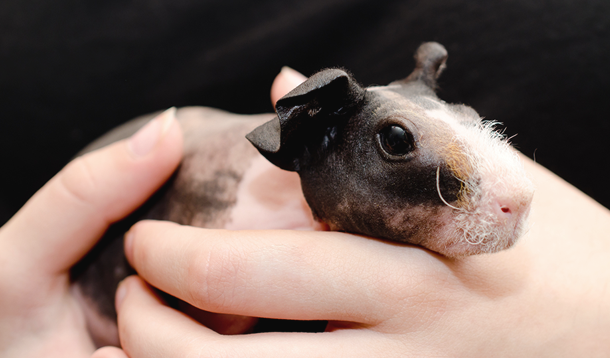 Pets die. It’s inevitable, but when it actually happens, it’s heart wrenching. Especially when you have kids.

We have two dogs who are getting on in years and we accept that they won’t be with us forever. But our skinny pig Ernie was only ten months old, so when he died suddenly it was a shock.

I was sitting next to his cage when it happened. He suddenly began convulsing in his cage, and was paralyzed and helpless in a matter of minutes. I knew when I picked him up and held him, his head tilted and nuzzled lifelessly into my neck, that he was leaving us. That’s the hardest part about having a pet—they are completely dependent on us for their survival. So when they get sick or hurt or god forbid die, it’s devastating.

After losing their grandmother only a few months earlier, my children were already afraid to death of death. My son is still having a tough time accepting that his grandmother is really gone and won’t be coming back. And only now is Avery starting to verbalize her feelings of loss, which are deep and earnest and heartbreaking.

Sebastian was with me when Ernie died. He saw too much before my husband quickly escorted him and Avery out of the room. Thankfully Avery, my youngest, didn’t see anything and has no idea about what happened. The next morning I told her Ernie’s cage was out getting cleaned. She didn’t ask where Ernie was, but she will. And what will I say then?

I suppose some people would suggest I tell her the truth. But I can’t. Not now. So I plan to lie. I’m going to tell her that our “turn” with Ernie is over and he had to move on to another family. In this case a lie is best. I know it.

So what do you actually do physically when a guinea pig dies? If you loved him like we did, you wrap him carefully in a fuzzy sock monkey blanket and tuck him inside a Kleenex box. Then you head off on foot through your neighbourhood carrying a suspicious bag and a shovel. When a neighbour stops you to ask what the heck you’re doing, you explain that you’re going to the pond in the park to bury your pet while trying not to cry.

I found a perfect spot near the pond under a birch tree—not an easy task while watching over your shoulder for pychos in the dark and swatting away the voracious bugs attacking you like a piece of mom meat.

I feel bad for the man who rode his bike past along the trail beside my dig site. He startled me so naturally I screamed. This is funny to me now because he screamed too. I suppose I did look creepy on my knees in the dirt in the dark digging, and crying, and reassuring a Kleenex box that everything would be okay.

It’s harder than you’d think to dig a hole under a tree.

There are a lot of roots to contend with. I worried the hole wouldn’t be deep enough, and I’m afraid to go back for fear of finding the grave desecrated by some carnivorous animal. (I did go back a week later and found an empty hole. I know it’s the circle of life and everything but… sad).

Ernie was initially my son’s pet, but he quickly became my little buddy too. My son’s room was too cold this winter so we moved Ernie to my kitchen office and his cage was pressed up snug against my desk. He became my officemate and I referred to him fondly as my “paper shredder.” I admit to babying him and to chatting with him off an on all day long. I took him outside with me so he could graze on the grass in the sun during my coffee breaks.

The dogs came too and they watched over him like two fierce-ish protectors. Some of you may be rolling your eyes, but those who have loved a pet understand the lengths we go to care for the animals who share our home.

We miss you Ernie and we’re sorry this happened to you. You were deeply loved. Sebastian hopes that you are with Grandie right now. I hope you are too.

Lisa Thornbury is a fun lovin’ mama, former elementary school teacher and good time seeker. She’s always up for a party, whether it’s a Lego luncheon, Barbie high tea or a raucous girls’ night out.

She writes the Yummy Mummy Club Party Mummy blog and you can also find her at www.foreverinmomgenes.com