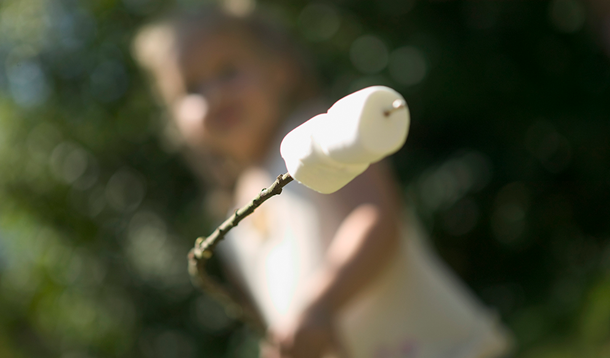 “This is the first time I’ve ever had a marshmallow.”

These words made me realize how different my kids’ lives have been compared to other kids these days. My wife and I have made some very strict choices regarding our kids and what they eat based on their food intolerances. When we learned that our daughter was intolerant to dairy and sugar, it was pretty easy. My wife and I share these same intolerances so it would be great to be able to just eat all of the same things.

My son is intolerant to potato, soy and sugar.

Most days we make up to four different variations for every meal. My wife is a vegetarian and I love meat, my son can’t eat SO MANY things and my daughter can be very picky.

But it was at a birthday party that I realized how different our experiences were. When my son announced to the world that he had “never had a marshmallow” there was a bit of questioning from the other parents. They first thought he meant “roasted”. He did not. He literally meant that he had never placed a marshmallow into his mouth. Later he had a s’more and, as you can imagine, there was even greater excitement.

A few months back, during a dentist appointment, they asked my son to suck on an instrument “as though it were a lollipop.” My son could not and did not because my son has never HAD a lollipop.

A lot of parents have asked about how difficult it must be to not give our kids treats like lollipops and marshmallows and soda pop and here’s the thing; it’s really not.

At birthday parties, we allow a small slice of cake and maybe a couple of potato chips. My son now knows how much of these things we allow and is actually pretty good at monitoring his own intake…usually.

And this diet doesn’t mean that kids can’t enjoy themselves or that they never get to eat anything that tastes great. We’re not just eating kale and rice chips. I mean, we are… but there’s a lot more to it than that.

Good taste does not need to be manufactured. I used to believe that the best things in life were all found in a single aisle at the grocery store. Over time that has dramatically changed. I still love chips and chocolate and ice cream, but I also recognize in myself what those things do to my body and I don’t want that for them.

For major occasions, my wife makes a gluten free, dairy free, sugar free chocolate cake that every RAVES about. We have people asking all the time for the recipe, especially for the icing. The secret to the icing? Squash.

The idea is that you absolutely CAN combine great taste with things that are good for you. It’s not an either or scenario. When our kids “will only eat McDonalds” or “only drink Coca-Cola” it’s because we’ve allowed (at least at some point) this to happen. We try to provide a lot of choices for our kids. We don’t force them to eat food that they don’t like, but we do ask them to try food that they’ve never tried. Last night my son ate caramelized onions and loved them. Some of their favourite foods are broccoli and cauliflower.

Kids will make good choices about food when you give them good options. If I ask my son if he’d like a cucumber or a tub of ice cream, I wouldn’t be surprised if he chose ice cream. In fact, I’d probably be a little bit disappointed if he didn’t.

Anyone want some kale?