That Time I Talked With My Daughter About Her Impending Period

As a dad, my knowledge and understanding of the anatomy of women is both practical and minimal. But as a parent, biology basics have to be in your wheelhouse. 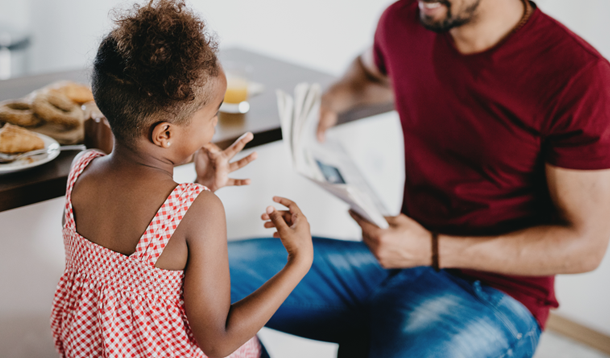 Boys are easy. One time they’ll ask you why they have erections, and they might ask you an occasional question about their testicles. It’s fine. As a dad, I mostly have those answers.

But a few days ago, my daughter sat down and talked to me about her impending period, and I don’t really know what to do.

First off, my knowledge and understanding of the anatomy of women is both practical and minimal. I was a liberal arts student. I can tell you about some poems that have to do with women. I could tell you the names of some great authors who are women. But biology is not in my wheelhouse.

But if you’re a parent, it sorta has to be. And it doesn’t matter if you’re a doctor or you’re not, you need to know the parts, what they’re called, and some basics about how they work.

Now, it’s important to stress that when my I say my daughter sat down and talked to me about her impending period that you understand that my daughter is three. It’s not that I thought that I would never have to talk to the kids about this. It’s just that I didn’t expect it yet. But given that my daughter once yelled “I HAVE A LARGE VAGINA” at me on a pool deck, I shouldn’t be super surprised.

Now, I’m lucky. I was raised by lesbians. My casual reading at age 9 was Women’s World and I know that, in general, I don’t need to know all the features of a good maxi pad, I just need to know what colour I need to buy.

I continue to be astounded by the curiosity of my children. I know, “kids say the darndest things.” I was ready for that. But there’s something that I forgot along the way, which is that while I knew that kids were going to ask a lot of questions, I forgot that I was going to have to have some answers.

I’m not going to regale you know with my vast knowledge of menstruation… but I will give you an idea of HOW my wife and I talk to the kids and why we think it’s important.

I’m a big fan of using real words. We never spoke “baby” to our kids. I don’t judge people that do, but for us, it was very much about making sure that we talked to these really little people like actual people. So, we don’t talk to my daughter about her hoo-haa (is that even how you spell hoo-haa?), we talk to her about her vagina.

And then, as I’ve mentioned, she talks to everyone about her vagina.

We were recently at a BodyWorld Rx exhibit at our local museum, and there was a body, devoid of its skin. It turns out that you take away the skin that holds the testicles in place, a man’s genitals are a strange and confusing sight to a child (and honestly to more than a few adults).

The kids asked, “what are those?” and I answered and told them exactly what they were and why they looked the way that they looked. I feel like I did a pretty good job of explaining them because the women behind me told me that it was quite educational, even to them.

There’s a writer named AJ Jacobs who does some pretty cool projects. For example, he wrote a book called The Year of Living Bibilically, a project he completed by following ALL of the rules of the bible (and there are some weird ones).  During this time, one of those things was to not tell a lie… at all. Sounds easy. Until your child asks for a bagel, and you’ve always told her that an English muffin is actually a bagel, and you tell her that you don’t have any bagels even though she sees a bag of English muffins on the counter.

She knows that this will happen “when I’m around 13 or 14” (and yes, I know it will likely start before that). We’ve been working a LITTLE bit on the why but mostly we’ve been working on the really important thing; it’s natural and we’re here to help.

Our kids know that mommy survives this period every month (and so does Daddy) and that when Mommy needs pads, Daddy will go get them for her. She knows that when this happens to her, Daddy (or Mommy…or maybe even her brother…who knows…) will help her and get her what she needs.

She knows that she is a woman, and that she has a “large” vagina, and that someday she will pee red, and I can’t wait to see what else she does with all of her power.

RELATED: “I Have a Large Vagina!” and Other Things You'll Hear as a Parent