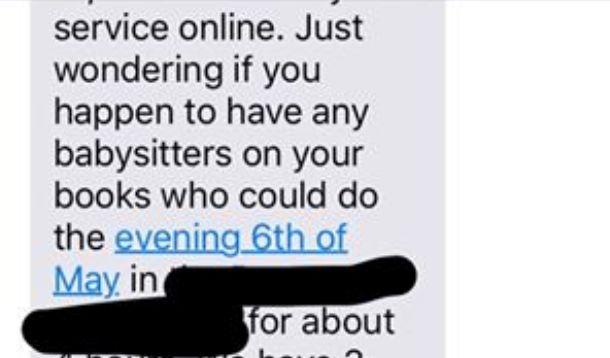 Finding the perfect babysitter isn't easy. After all, you're charging another human (often one you don't know from Adam) with the job of caring for your impressionable babes while you aren't there. Terrifying.

No one wants to invite a potential axe murderer into their home, so how you can ensure that your sitter's worldview aligns with your own? The answer is, you can't. Aside from interviewing prospective sitters and checking references, you have to wing it and trust your gut.

One Australian couple tried to spell out the sort of individual they wanted looking after their three children. They were quite explicit about what they expected in the candidate.

No mention of respect or kindness. No mention of TV, bedtime, or smoking in the house... The couple sent the following text stipulating their very specific requirements to the agency REACH Kids.

While it's probably fine for a family to request someone from a faith background, this couple went one further and actively asked that the sitter be homophobic like them.

"We also request that the babysitter supports our teaching of anti gay marriage, and lack of support for the gay/rainbow flag community," read the couple's text. "We are just asking for a normal person, not one with coloured hair or supporting radical gender theories. We want to raise our kids to be normal."

Because of course the first thing a sitter will do the second you leave is swathe your child in a rainbow flag and indoctrinate them in pro-LGBT propaganda. Sigh.

REACH was stunned by the request, and shared it on Facebook before rejecting the couple:

"While I can understand wanting a sitter whose religious beliefs align with your own, to ask that the person serving you openly disrespects another group of people is outrageous."

Hope this couple likes take-out (normal food, nothing ethic, obviously) because I have a feeling they'll be stuck eating at home for a very long time.