I Will Mother Your Child, Please Mother Mine

The night a random child was left on my lawn 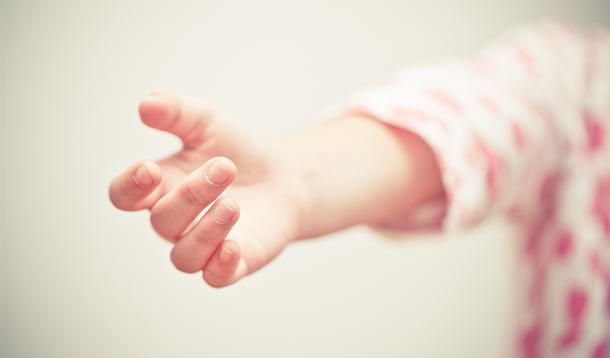 It was a happening Friday night at our house, which translates to: I had been reading in my daughter’s room while she fell asleep and I had lost track of time. With both girls out cold, I tiptoed down the stairs to find my husband. It was 10 pm, and he was nowhere to be found. I searched every room he could be in, until I thought to open the garage door. There he was, flashlight in hand, and a look of confusion across his face.

“What’s going on?” I asked. He seemed lost for words. “Um, you should probably come out here. I think one of the kids on the street got drunk and passed out on the side of our house.” Ok, weird. I was picturing one of the 20-ish boys from down the street. I slipped on my shoes and threw on a sweatshirt. It was a warm day but the temperature had dropped to about 10 degrees. I walked out to find a taxi at the end of our driveway. The driver’s face was contorted in uncertainty like my husband's. I rounded the wall of my garage. The area between my house and my neighbour’s is the requisite 8 ft wide, sloped to our back yard and was steeped in inky darkness. My husband shone the flashlight down the small hill. There she was. Curled in to a ball, motionless, wearing an outfit better suited for a hot summer day.

I am one of those people who panic internally but maintain calm on the surface. My head said shit, shit, shit, shit, there is an unconscious kid on my lawn, what do I do? How do I help her? But my body edged purposefully towards her and placed a hand on her back. “Hey, are you ok?” She wasn’t moving. “Hey..” Suddenly she popped up, eyes as big as saucers, huge ridiculous smile on her face. “Hiiiiiiiii” she drawled. This girl was plastered. I was relieved. She was ‘ok’. Well she was beyond drunk, but OK.

I asked her a bunch of questions, her name, her age, where she was going. Turns out she was 17, she knew her name, but she kept giving me the wrong address and asking for a girl on our street who didn’t live there. The cab driver told us he’d picked her up from a bar. She had no ID and no phone. Shit all over again.

I looked at her. Though she was as tall as I was, she was still a little girl. Someone’s little girl. Someone’s lost and alone little girl. I did what I know how to do with children, I mothered her. I tried to lift her up from the ground but she felt sick and instead vomited all over the grass. I took the hair elastic from my wrist and wrapped it around her hair to keep it away from her face. I rubbed her back and sent my husband to get water. After a few minutes I managed to lift her to her feet and move her in to the light.

I called her dad, explained his daughter was OK, though drunk, but she was at my house and he needed to come get her. He sounded shocked, as I would be, but he was on his way.

I covered her up in a warm blanket. I sat her on my porch and wrapped my arm around her. Her head lulled back and forth and she told me half-stories from her evening. I asked where her friends were. She told that when they got to the bar, she had been turned away because she was too drunk. She told them to go in without her. She’d gotten in the cab on her own. According to her, she’d left her phone and ID at her friend’s house so she wouldn’t lose them. Now she was here.

I wanted to blame someone for this but I realized there was no one who was responsible.

She was old enough to make decisions for herself. Should she have drank that much? No, but most people have at some point in their lives.

She was to be staying at a friend’s house. Is it that parent’s fault? No. Again, 17 year-olds don’t need monitoring. I wouldn’t expect another parent to be watching my kid at that age.

The bar turned her away. They couldn’t be responsible because she was never actually a patron there.

The cab driver took her. Should he have first checked to make sure she knew where she was going?

No, this was just a series of unfortunate events that landed her on my lawn. And I am grateful she did because I shudder to think of where else she could have ended up or what would have happened to her if the cab driver had left her alone, drunk, and cold on our street.

Her father eventually came to pick her up. He apologized for ruining our evening. I told him it was fine. I was 17 once. Kids make mistakes.

One day I am sure my girls will make their own mistakes. I just hope that if they need a mom when I’m not around, that someone else steps in to take my place.

RELATED: This Social Media Site Is Putting Your Teens At Risk