Buzzkill Alert: These are the Apps Your Kids Use and You Need to Know About

Feeling out of the loop? These are the popular apps kids are using. 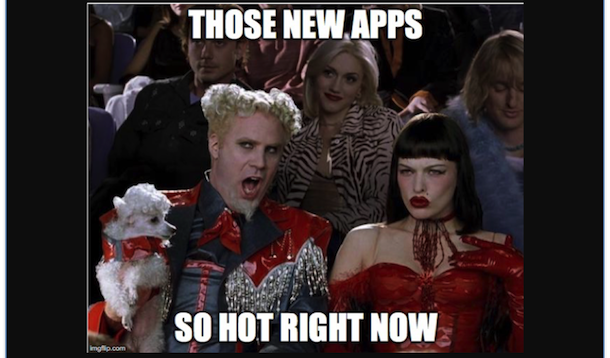 I was teaching a bunch of teenagers a few years ago and I used the singer Arianna Grande in an example. Only I made a mistake and pronounced her name A-rianna instead of AH-rianna. Three girls in the front row giggled and were happy to point out my error in that I’m-13-so-I-know-more-than-you-do way. But they were right. I had fallen out of the cool loop and had pronounced it wrong.  It happens to the best of us, especially if we have very young kids and are hovering between what USED to be cool and what our kids have YET to deem cool in their own adolescent years.

I can’t help you with teenage fashion trends or best TV shows, but something I do know are apps. On top of Snapchat, Twitter, YouTube, and Instagram, below are 4 more apps that are popular with teens .. and that you should get to know.

Released early 2016, Musical.ly is like being on a lip sync reality show. Users can film videos, add special effects, lip sync to your heart’s content. Videos can be shared via your existing social networks or with the Musical.ly users. Users can participate in contests and maybe get featured. Some Musical.ly stars have upwards of 10 Million followers.

YouNow, not YouTube, is a live streaming network which is like a having your own live cable access show, from your bedroom, with audience comments. Users stream whatever they want and then chat with those who are watching. You do not need an account to be creepy… I mean to watch the videos.

Kik is a Canadian born chat app that allows you to chat with multiple people and share media. The reason Kik became so popular is that it was one of the first chat apps that was platform independent. That means you can run Kik on any handheld device or tablet or a computer – ie not IPhone, Android, or Desktop specific. Caveat: Kik has ‘bots’, which are intelligent software that chats with you and drives business to partnering sites (ex H&M – “I see you are talking about skirts! We have several on sale…”)

Tumblr is actually edging on 10 years old but continues to grow in popularity. It is supposed to be a cross between Twitter and long form blogging where you can make a Tumblr (short for Tumble blog). Users can create their own blog with images and text, or participate in others people’s blogs. Some funny published books like “Reasons Why My Kid is Crying” came from a Tumblr with the same name where people submitted their own photos.

Hopefully this information keeps you afloat next time you need act cool in front of a teen you know. In the mean time, for more information on these networks and 30+ other popular apps, you can download my Network and App Resource for free.

RELATED: The Sneaky Secrets of Your Metadata: What Are Your Apps Giving Away?