Here's a solution looking for a problem where the sun don't shine. 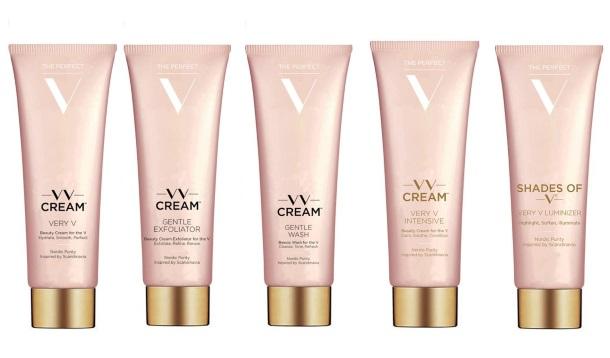 Have you ever sat around and thought: "My lady parts could use a makeover"?

I don't even know where to begin with this product called "Shades of V" - an entire product line which includes highlighting slash luminizer makeup product making "THE PERFECT V™". Let me make this bigger so you can see it clearly.

"Holy shit," you're probably saying. "You can trademark a letter of the alphabet?"

OK that that was my first question. Your first may be more like "V? Dafuq is that supposed to mean?"

Here in the world of adult momhood, where any shame we may have had about our parts went out the window likely sometime after half the medical student population of the local University trouped through our rooms and had a look during labour and delivery, we have no problems identifying parts with proper names. The hole where nature sends babies through? That's the vagina. And then the exterior parts around it, that's called the vulva. And one might say that, should we stand a certain way, the mons does make a bit of a "V" shape.

Tee-hee. Why, "V" could stand for any one of these things!

Points for extra special creativity, I suppose, except for the fact that "V" also stands for "Vague AF" which I would argue is not necessarily something you want in a product that may be unsafe to apply to certain delicate parts of our anatomies.

But the kicker is the why would we possibly want such a thing? Well, here's the answer:

The Perfect V™ was invented for Scandinavian women, who (by claims of the website) have public nudity in their DNA.

Yes, the website actually says it's in their Scandinavian DNA to strip in public, a biological factoid that's nearly as brain-meltingly confounding as watching Halle Berry tell James Bond in Tomorrow Never Dies that injecting people with DNA will make them look like other people. (Can you seriously imagine how awkward sex would be?)

I applaud the sentiment of being "carefree and confident" in one's skin, regardless of age or shape... but then... in the very next section, it goes straight into V-shaming (yes, I went there). What if I want to "lose my underwear anywhere, anytime" (YES IT SAYS THIS) and gasp my "V" isn't in shape?

Should you decide to be free and drop trou in public - outside Scandinavia - you're probably going to have to worry about being arrested for indecent exposure more than whether or not you're going to be judged for failure to wear a "V" highlighter.

Even inside Scandinavia, I can't imagine people would be able to find a damn to give.

But, perhaps I'm underestimating the market for beautifying products for our nether regions. Maybe it's only a matter of time before the makeup companies this side of the pond catch on, and I'm missing opportunities here to score a sweet marketing gig making slogans.

How about "Maybe she's born with it. Maybe it's Vulvaline"?

RELATED: Do Not Stuff Your Vagina With Herbs (or Spices) Please