The Secret To A Long, Happy Marriage Is Complicated

In Good Times And In Bad 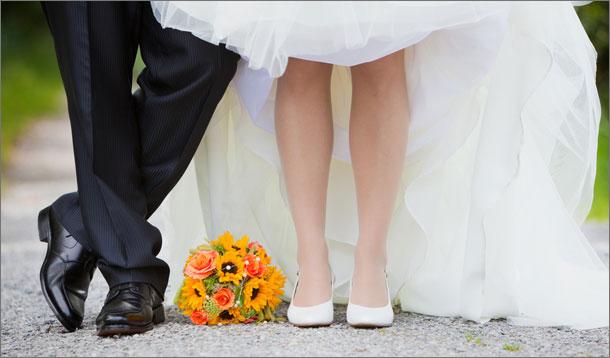 My seventeen-year-old niece recently asked me for help with regards to her essay on a social issue. The issue was marriage vows and whether or not people take them seriously enough. According to her, people don’t. She then referred to a Toronto Star article she read about Flo and Willem Schurman, a couple living in Richmond Hill, Ontario, who have been married for seventy years. Yup, that’s right. Seventy years! The “newlyweds” hold the record for the longest marriage in Ontario. My niece wondered what their secret was. According to the happy couple, they never went to bed on an angry note. Huh? That’s it?! Impressed by this couple my niece asked why there weren’t more examples of long-married couples. “What’s wrong with people?!” she asked. Don’t they take their vows to heart?  Are they lazy? Do they just fall out of love? Ah, youth! If only it were that simple.

I realized that the answer to a long and happy marriage is not so black and white. There are many shades of, ahem, grey. Let’s face it. Being married is damn hard some...years! My husband and I have been married for fifteen now. What’s in those fifteen years? In short, you have the good, the bad, and the ugly. There have been wonderful times like giving birth to our boys, hilarious lakeside cottage days with friends, hours on sunny beaches with grandparents, and uncomplicated backyard gatherings that go late into the night. Together we have said goodbye to those who knew us first and loved us unconditionally; it was my husband who took the call that my beloved grandmother had passed away and I will never forget him gently sitting me down to tell me. Together, we have received news that a family member or friend would not win their fight against cancer, and we have held the hands of those who lost more than we know we could bear—a child.

It’s really easy to be married during the good times, the celebratory times. How hard is it to sit on a dock and enjoy a glass of Kim Crawford while the kids are contently splashing around? It’s a different story when times are challenging or boring or when you come face-to-face with purely awful moments that you never saw coming. During those chunks of married life, what is easy to do is to get lost in our own thoughts, our own pain and put distance between one another. But it’s during these times that we really need to remember our vows—"for better or for worse, in good times and in bad”—and face the music of what exactly is going on and why. Talk to one another. Open up. Say the words that need to be said in order to face the challenge together. And for goodness sake, do some introspection. Take an honest look at yourself and see where you are struggling. It’s only in “the worse” that we have an opportunity to grow as individuals and as a couple. You never really believe that until it happens but it's true. It’s an opportunity to come to a deeper level of love and understanding.

No doubt Flo and Willem are holding back on us. They should write a book. (Or blog for Yummy Mummy Club!) Of course they experienced many joys and much heartache in their seventy years together. Of course they did! God bless them for never going to bed angry at one another. I know we cannot say the same. But I can tell you this—whatever happens my husband and I will continue our journey together. Our belief in one another has never been stronger, we are aware of todays shortcomings, have cried over them but we are still standing next to one another, talking, laughing and the hard one—accepting. We know there will be more loss and pain in our future. We also know there will be way more good times. So while I think our age at the time of marriage prevents us from reaching a seventieth anniversary, number sixteen is only nine months away. And by gosh, I really think we are going to get there!

I am a stay at home mother of two boys. We moved from a big city to a small town out east more than 7 years ago. I miss my family and friends but love NS.

In my past life I worked in corporate and non-profit. I preferred the latter. Today I manage our home and everyone in it, volunteer a lot and dream up some great stories. Sometimes I even write a few down.