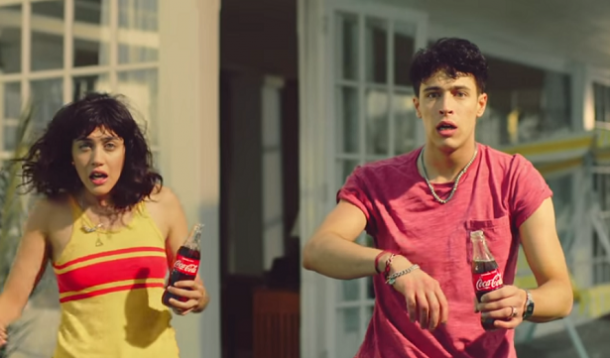 Any parent who has two or more kids has suffered through sibling rivalry, or what I’d like to call the “You two are driving me bat sh*t crazy and I’m going to sell you both to the circus” stage.

They have fought over everything from who gets the bigger piece of dessert and bed times (yes, he gets to stay up because he's older), to what side of the bed they get to sleep on while we’re on vacation, to which toilet they get to use. Now that they are both of the age and height requirements, it’s who gets to sit in the front seat of the van.

I’m here to tell you that there are days when nobody is allowed in that front seat because I’ve had just about enough.

But neither of them has ever fought over a pool boy, most likely because we don’t have a pool. Well, sibling rivalry gets a new twist in this commercial by Coca-Cola where a brother and sister are in a race against time to see who gives the very hot, parched pool boy a cold bottle of Coke.

The two both get to the fridge at the same time to grab a cold Coke,B and what ensues is a running battle complete with purposeful tripping and an epic fall that might just make you gasp.

They finally make it outside and come to a screeching halt because, lo and behold, mom has already beat them to it, and she made him a sandwich to boot. We never know who the pool boy would choose, and that’s the whole point. Who really cares? I, for one, want to stand up and give Coca-Cola a slow clap for this commercial that shows we all need a cold drink on a hot day - no matter what our sexual orientation.

But we already knew that, didn’t we?

You can watch the whole commercial below. It pairs well with a cold drink and a fan.

RELATED: I'm Terrified My Son Will Tell Me He's Gay