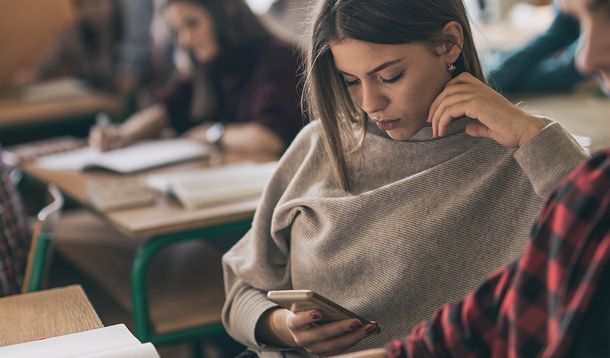 What goes on in classrooms across this great country of ours has changed significantly since I was a kid in the system 20+ years ago. Back then, we had supplies and textbooks and well-maintained schools and classrooms with a reasonable number of students. We had limited fundraisers because schools were still considered important harbingers of our future and the government funded them accordingly. Teachers didn’t need to spend as much from their pockets to make sure their rooms’ basic needs have met.

Back then, there were no tablets or smart boards, and we learned to type on typewriters and, saw movies on reels or a giant TV on a giant stand with a giant VCR. Our photocopies were light blue and smelled like the ditto machine ink they were printed on.  If we wanted to find a book in our library, we needed to wade our way through a drawer of cards to find the dewy decimal of the book for which we were looking.

Times, you see, have changed. A lot. Back when I was a kid, pagers weren’t a thing, now every kid in high school has a cell phone. It’s a thing. And it’s a distracting thing. And it’s a thing the province of Ontario has decided to try to put the kibosh on.

I just got into a heated debate with my best friend of thirty years over whether or not banning cellphones in classrooms is stupid. I err on the side of stupid.

“I just don’t see any good reason to allow a child to take an addictive, distracting device into a classroom,” she said, legit confused by my disagreement.  “Like why would kids be allowed to have their phones during class? There is zero need for the phone to be in the class.”

The province agrees. At least, Minister of Education, Lisa Thompson, says she does. I’ll set aside my cynicism surrounding the timing of the announcement that the province wants to move to ban cell phones in classrooms. I’ll pretend, for arguments sake, that this isn’t just a smoke screen to distract from the fact she has a province of pissed off parents, scared for the future of kids with autism.

This ban isn’t unchartered territory. The Toronto District School Board had a cell phone ban on the books for four years, before they decided it was a futile effort and ditched it.

Most people agree with my friend – that they’re unnecessary and distracting and have no place in the classroom.

No, my ten-year-old doesn’t need a phone at all, much less in a class room. But lots of children need them for a myriad of reasons. They are accessibility tools for so many children. They are learning tools. They are safety devices. They serve lots of purposes beyond being distractions. Ask any parent whose teen has been in a lockdown how they feel about cells in classrooms – they’ll all be pro, I can pretty much guarantee it.

No, we shouldn’t have rules solely based on worst case scenarios. Yes, it appears that they are stipulating that there would be exceptions made for children with special needs.

The ‘rule’ makes it sound like teachers are allowing kids to Snap and Insta the class away, knowingly. As if there’s a free-for-all now with cell phone use in the classroom. I wasn’t allowed to send the bff mentioned above notes in class, but I did that anyway.

Don’t misunderstand me. I do NOT think kids should be farting around on their tech in classrooms. I DO think kids are addicted and I understand that kids distracted by tech in the classroom is a real, legitimate issue. But I’ll be hard pressed to entertain the idea that a ‘ban’ will somehow change any of that.

The TDSB got rid of the ban because it had no teeth. The fact is, schools and teachers have been regulating, or at least attempting to regulate cellphone use in the classroom forever. It’s a tightrope walk, balancing their use and need and right to carry personal property and addictiveness. There is more to those little pocket super computers than social media. They have become tools. They have become lifelines for our helicopter generation.

They have, I stipulate, become a problem in Ontario’s classrooms.

But, times have changed. Ditto machines are long gone, along with typewriters and quality funding for schools. Schools have had to adjust to these new realities. Dealing with cellphones in classrooms is no different. They need to managed, not banned.

If a ban in the biggest school board in this province was any indication to the province as far as the usefulness of this ‘rule,’ Thompson might have saved her breath. But (the need for a smokescreen aside), the reality is that a ‘ban’ isn’t serving any real purpose beyond pretending to appease issues with non-educational uses of cells in Ontario’s classrooms.

This ban, if I may be blunt, will do sweet-shit all. There are far more pressing issues the province seems far too willing to back-burner in the name of a focus on what kids are doing wrong, versus what they, they province are, to affect the quality of learning in Ontario’s classrooms.

Quite frankly, on the list of things I want seen  fixed in our schools, I’d rather give teachers the power to monitor use in their classrooms, and have the province focus and giving those teachers the tools they so desperately need to ensure they have the opportunity to actually focus on giving the kids in their rooms the education they deserve.

That’s not on the kids. That’s on the province. Blaming the kids for the issues with learning in our stripped-down classrooms is hardly the issue. But good job trying to convince us it is.