I Am Proud to Say I Was a Soldier

I left for my basic training two weeks after I graduated from high school. 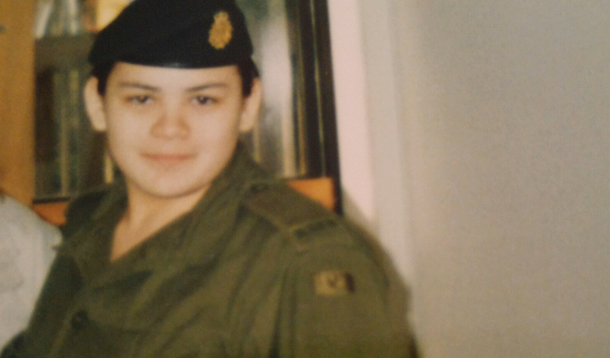 I had just turned 17 years old when I joined the Canadian Armed Forces reserves. I left for my basic training two weeks after I graduated from high school. I spent seven weeks away from my family and friends, endured more “character building” than I had ever imagined possible, did things that I never thought that I could, and came home a different, more confident girl than I was when I left.

During my first year of university, I spent every weekend commuting to my unit, which was an hour + drive away, doing courses to become an Army driver and an Artillery gunner. While on my gunner’s course, I was the only girl in the group, and had to work really, really hard to keep up with the guys, especially in the strength department. I had to spend my evenings practicing lifting the 100-lb breech block into and out of the gun because of my size and strength disadvantage. At the end of the course, I was presented with an award for the top gunner on the course.

My goal, when I joined the Army, was to go overseas to Bosnia and be a peacekeeper. During my second year, I was old enough to try out for a tour. I tried out, but didn’t make it. The mission switched from being a UN one to a NATO one and everyone had to try out again. I chose not to, as I had decided to continue university in the fall if I wasn’t chosen, and while we were waiting to hear what was happening, I had registered for my fall courses. I spent the next 5 months working as a driver with a regular force unit, only seeing my family a couple of times when I used my leave. I met some of my best friends in the Army - people who, to this day, I still call my best friends almost 17 years after we first met. I have many others who I consider my friends from the Regiment. The sense of family and camaraderie was something that I had never experienced, and probably never will again. I was, and still am, proud to say that I was a soldier.

A few years after I joined, I was injured. Eventually I found out that because of this injury, I was no longer able to do my duties as an artillery gunner, and I was devastated.

I spent some of my most formative years as a soldier, and it changed who I am from the core. I have a history of military service in my family, and one of my great uncles was a regular force artillery gunner during the war. After I passed my gunner’s course, he presented me with his old cap badge, and it was such a proud moment in my life. Many others have fought in various conflicts, and served in peace time. I have friends who are serving today, both as regular force soldiers and reservists. I am proud of each and every one of them, and proud of all the soldiers who serve our country, and other countries.

On Remembrance Day, I want to remind people of the human side of our soldiers. They are mothers and fathers, daughters and sons, friends of many. They give their time, their dedication, and sometimes their lives to fight for the freedom that we, and so many others enjoy. They defend the rights of those who live under oppression, and travel the world fighting for peace and dignity for all. Sometimes they come home suffering from their own trauma, and sadly, are not always able to find the help that they need when they need it. They will experience things, and see things, that the average person would never even dream of, or sometimes, ever want to think about.

Regardless of your thoughts on various conflicts, please remember that the people wearing the camouflage and the helmets, carrying the weapons and the cameras, are people just like you. They fight for what they believe in, and without them, we might live in a different world today. Don’t just think about them on Remembrance Day and forget about them for the rest of the year. Some of our veterans are aging, and soon we won’t have any left who fought in the World Wars. Now is the time for us to embrace them, and the stories and knowledge that they have to share. Same goes for our young veterans.

To all the soldiers, and the families and friends who love them, you have my utmost respect. To my brothers and sisters in uniform, both those who are still serving and those who have finished their time, I thank you for the sacrifices, the blood, sweat and tears, and the belief that you can change the world.

We must never forget.

Previously published at One Crazy Kid.

Singing, dancing, and laughing through motherhood (and life in general) is how Brandee thought things would be when she found out she was pregnant. In reality though, as a wife to and mum of two crazy and amazing dudes, she often finds herself laughing at fart jokes and dancing through sword fights. Brandee likes to approach life in a straight-up way with honesty, a sense of humor, and lots of sass. She blogs about the good, the bad, and the real when it comes to life, love, and everything in between at http://onecrazykid.com. You can also keep up with the antics of the One Crazy family on Facebook, Instagram or Twitter.