Some Rhubarb History and Some Recipes For You To Experiment With 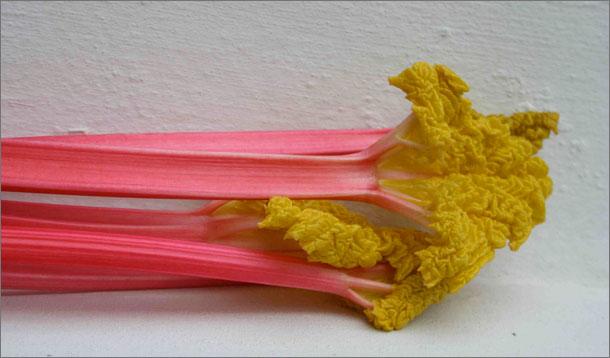 Pink and sour, rhubarb has been making its way into grocery stores and farmer’s markets these days, ready for you to take home and experiment with. When I was a child, it was not unusual to see us wander out to the garden and hack off a stalk, then sit with a bowl of sugar and dip the rhubarb in the sugar bit by bit, crunching off bits for a snack. Rhubarb is similar to celery but very sour and fibrous.  I’m not sure why we ate it that way as kids, but we thought it was great!

Rhubarb arrived into the United States in the 1820s and was considered a vegetable at first, until 1947 when a New York court ruled that it was to be a fruit instead.   A hardy plant, you can grow rhubarb almost everywhere, even in containers as long as they are large enough to accommodate a season’s growth.  When harvesting look for firm, red stalks which can be eaten immediately. Discard the leaves, as they are poisonous-while touching them won’t harm you, eating them will make you sick.

Calorie wise, rhubarb is fairly low at about 26 calories per cup, but contains a good source of fiber, vitamins C, K, potassium, and manganese.  Plants usually produce an abundance of stalks and I remember my mom having so much that at times, she gave it away because we didn’t know what else to do with it!

Have an overabundance of rhubarb?  I have some ideas, and Twitter came up with a bunch for you as well:

@msjoyfg: I like rhubarb water - you steep it like tea with sugar then cool. A sprig of mint is yum in it.

@quintemom: it freezes well, best if you mix it with sugar first.

@mama_b: Rhubarb is great with duck. Cuts through the fattiness.

Have any rhubarb tips or recipes to share?  Spill it!