Memories From My Childhood 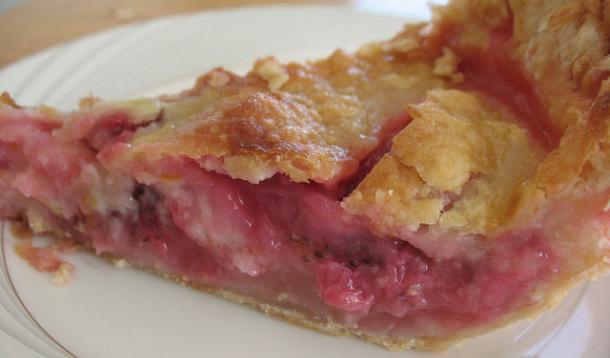 If I had to pick a dish that reminds me of my Mom, it would be rhubarb pie. Having grown up in a remote area of central BC, rhubarb was a staple ingredient that found its way into jams, pies, and tarts. For many years I avoided the tart fruit, but last weekend Farmer Jon convinced me to take some home from the Sechelt Farm Market. The reward was a sweet, slightly tart pie with a hint of orange and a flaky crust. Now I'm wondering why I avoided rhubarb all these years.

Mix together the flour and salt in a large bowl. Using a pastry cutter or two knives, cut the butter and lard until the mixture resembles crumbs. Stir in the cold water, a little at a time, until the flour comes together into a dough.

Turn the dough out onto a lightly floured counter and gather into a ball. Split into two portions and form each into a disk. Cover each with plastic wrap and chill for about 30 minutes to an hour.

In a large bowl, toss together the rhubarb, strawberries, sugar, flour, vanilla, and orange zest.  Set aside.

On a lightly floured counter, roll out one of the disks of dough to about 1/8 thick and fit into a 9 inch pie pan, leaving about 3/4 inch (2 cm) overhang. Spoon in the rhubarb filling.

In a small bowl whisk together the egg yolk and 2 tsp water, then brush over the rim of the pie.

Roll out the other disk to 1/8 inch thickness and fit over top of the rhubarb filling, leaving about 3/4 inch (2 cm) overhang. Fold overhang under bottom pastry rim, seal, and flute edges. Brush the top with egg and sprinkle with sugar. Cut some steam vents in the top.

Pre-heat the oven to 425 F. Bake on a baking sheet in the bottom third of the oven for about 15 minutes. Reduce the oven to 350 F and bake another 45-50 minutes, until the crust is golden and the filling bubbly.

Cool pie completely on a rack before serving.