How Motherhood Pushed Me to Frantically Piece Myself Back Together

Welcome To The Jungle 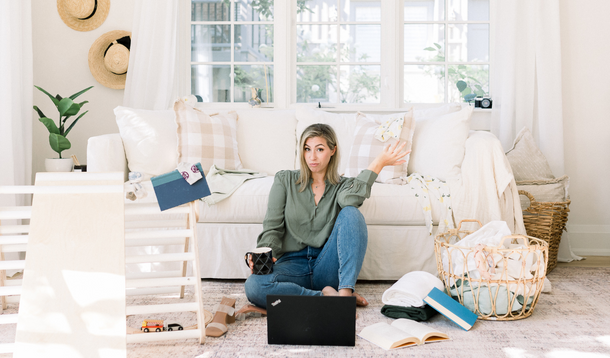 Most (if not all) women can relate to not feeling accepted or “good enough.” It’s ingrained in us – this idea that we have to be someone other than ourselves. And why wouldn’t we feel this way? From our youngest years, a certain standard for womanhood is projected onto us. A series of tactics that make us question our self-worth while comparing ourselves to others. At the same time, women are made to believe that motherhood will be the single thing in life that will fulfill them, one of the greatest joys in their life. And, of course, ‘good mothers’ effortlessly bond with their new baby and adapt to their role with ease.

My theory – this is exactly why mothers feel lost.

When I was 13, I changed my sense of style and personality in an attempt to fit in. At 18, I held my breath and handed over my virginity when someone expected it from me. At 21, I chose a career that promised success and respect rather than passion and aspiration. For nearly twenty-two years, I placed pieces of myself aside to make room for someone else. I filled myself with other people’s expectations – all while working towards the ultimate achievement as a woman: motherhood.

Then I got there. I became a mom – riddled with holes like a piece of Swiss cheese. And with all of its expectations and demands, motherhood hit me like a truck. I was thrust into this role believing my instinct would kick in – that the sense of fulfillment would come. But instead, being a mom threw me into an earth-shattering identity crisis.

I had no idea who I was. Motherhood felt like a prison. Because while I grew up believing motherhood would fulfill me, it became the root cause of my blame for the way I looked, for my career falling apart, for my marriage getting rocky, and for not being able to look in the mirror and recognize who I was.

When I realized motherhood didn’t make me feel instantly fulfilled – as the world promised me – I began to think I was broken. The pieces of other people I had filled myself with, fell away – exposing holes that desperately needed to be filled with the pieces of who I truly was.

Losing yourself doesn’t happen overnight. It’s a long, drawn-out process. And that's kind of the crappiest part about this whole thing. Many of us don’t realize how discombobulated we really are until we have kids of our own. Then “self-care” is shoved down our throats like it’s some sort of magic solution to healing. It’s not. It takes way more than a yoga class every now and then. Though, I will say – I recently got my first Brazilian, and I’ve never felt more confident in my life. My vagina looks like a chicken breast, but some weird psychological magic is happening there.

Being a mother is something I’ve dreamed of since I was a little girl, and never in my mind or my heart did I anticipate motherhood would be the thing that resurfaces all of my trauma, insecurities, and failures. But when I think about it, it makes complete sense that motherhood is when most women feel lost.  We’re faced with this overwhelming love and responsibility to raise a child when there’s a child inside all of us that never had the opportunity to grow up.

But here’s the great thing about motherhood, though, kids bring perspective. They see things through rose-coloured glasses and shine brightly in this world like a light. Society hasn’t touched them yet – it hasn’t dulled their sparkle. And just like a candle in a Jack-o-Lantern, my children’s light beamed through my holes, all the pieces of myself that I had given away, and showed me where I needed to piece myself back together.

6 BS Things You Should Never Say to a New Mom

Anneliese Lawton is the author of the heartfelt and hilarious parenting memoir, Welcome to the Jungle: A Frantic Journey Through Motherhood and Self-Discovery. She blogs over at Grownup Glamour by Anneliese Lawton, and co-produced the web series Moms Unleashed. She is the proud mom of three rowdy-ass kiddos who inspire everything she writes. Her life work is a series of passion projects related to motherhood and mental health. Visit her on Instagram @annielawton_ where she keeps it real as sh*t.