Only a year ago, I was her. But not now. 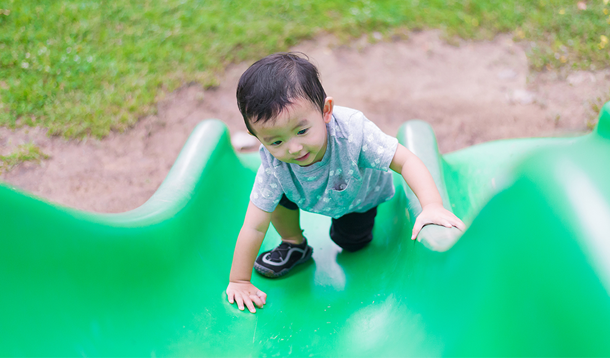 I’m reading a book at the playground. Nobody is currently on the slide except for my boys, 6 and 4, who are desperately attempting to run up the slide portion. They aren’t faring well, making it only midway before slipping down again. After a few minutes, another kid comes over to slide down the slide, so they move out of the way and on to the swings to see who can go the highest.

The playground is mostly empty, but there are a few moms with kids in tow, all at different ages and stages, I’m the only one on the bench not paying attention to what’s going on. It’s a really good book.

One little boy, who looks to be about three, had been watching my boys and decides he too will attempt to climb up the slide. The mom says loudly, “No, Colin. You never climb up a slide. It’s rude. Go to the ladder.”

She makes a point of looking over at me as she says it.

It’s all I can do to keep from laughing. I can’t even be mad, because I get it. Only a year ago, I was her. But not now. Now I could literally give zero shits.

My kids are at a park playing and experimenting, and having fun. They know enough to move out of the way when someone wants to come down the slide, they are polite and inclusive with the kids.

Last year I would have followed them everywhere, hovering, telling them how to act, reminding them that attempting to climb up a slide is rude.

I did it for fear of being judged. If I wasn’t following them around, watching their every move, playing with them, exclaiming in delight at every little thing they did, what would the other mothers think?

And it wasn’t just at the park. In my head I had this vision of what others felt I should be doing. The reminders to my kids were constant:

She asked you a question, what do you say?

Don’t climb up the slide.

Share your toy. I know it’s your favourite but (insert name of kid) wants to play with it.

My ‘aha’ moment came when a friend pointed out that my son didn’t actually have to share his favourite toy with her son. Would I share my brand new favourite jacket with her? The answer to that was a resounding no. I had barely worn it myself.

“Well,” she said. “Why should he have to share his favourite toy?”

That was the day I began to realize my fear of judgement was simply because of some ridiculous need to look like a good parent in front of people I barely knew, or didn’t know at all.

And, let’s face it, I was probably thinking I was being judged because I was a little bit of a Judgey McJudgerson myself.

One thing I’ve learned throughout the years is that the moment I judge another person for their choices, it’s because of one of two scenarios:

1) I have no idea what the f*ck I’m talking about. Like how when my son was a newborn and I swore up and down I would never give in to a toddler tantrum, lie about the time so I could put him to bed early, lose my shit over something small, or allow him to climb up a slide (people have very strong opinions on climbing up slides, trust me on this.)

Now my kids are teens and there is a whole new batch of things I swore I’d never do that I’m now doing.

This is how I learned rule No. 1 of Parenting: Never Say Never. The moment you say you will never do something, that is the moment the Gods of Parenting will laugh in your face.

2) It meant I needed to take a good look at myself. Because that judgement is coming from some insecurity on my part. It, in some ways, allowed me to feel superior to another parent, even for just a nanosecond.

Basically, putting down someone else’s choices validated mine.

And that is why letting go of judgement, on both sides, is so incredibly freeing. It allowed me to parent to my children’s needs instead of some self-imposed set of criteria I thought I needed to follow.

It took awhile to get there but eventually I ignored the stares when my kids were having a tantrum, I didn’t compare lunches and snacks, and if someone told me about a way I ‘should’ be doing something, I perfected the blank stare, thank you, smile response.

Or, as a friend of mine said, “Yes! I remember when I stopped caring. It was so freeing. Sure, the kids were in dirty clothes and we openly ate at Teen Burgers while others snacked on organic hummus, but we were ALL happier.”

RELATED: Calling Out Mrs. Judgy McJudgerson at the Mall