Finding Myself on the Kitchen Floor 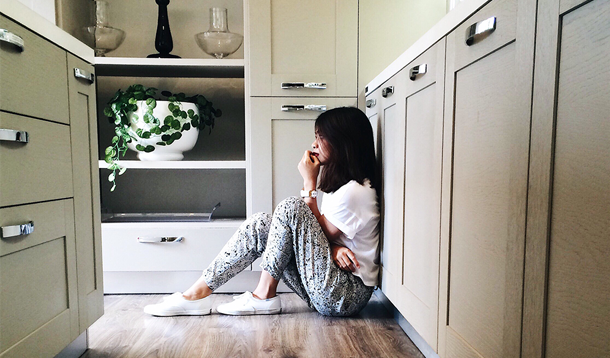 “Is that the dishwasher you’re leaning on?” asked my bestie through my iPhone’s screen last week.

She giggled and I continued on about my most recent misadventure at the ice skating rink.

It was only later, as I washed that night’s dinner dishes that I came to appreciate the significance of those tiles under my feet as an important part of my motherhood journey.

Nearly eight years ago, I became a mom. And every notion I had of mothering a newborn went out the window, as I lay slumped, much of the time, in tears on the kitchen floor. There were days when I swear that linoleum was the only thing keeping me from dropping into an abyss of despair. I don’t know what it was about the kitchen – maybe it was the way the sunlight streamed in through the windows as evening approached that made the space feel like a warm hug. Maybe it was just that I used up my last ounce of energy trying to throw together a cold sandwich for my starving body, and fell right where I was.

We moved homes when I was pregnant with my second child. This kitchen had hardwood floors. I tell you, though, fancy as they were, when that second baby came, crying and pooping and projectile vomiting, those floors did the same trick as the old linoleum. My butt landed there countless times throughout the day as I wailed about the tragedy of it all; me - a sleep-deprived, milk-engorged, fading version of myself, trying to pull myself together with my back against cupboards containing cleaning supplies.

I could have flooded those floors with my tears, but the refrigerator beat me to it. The damage was extensive, and out came the wood. Now we have vinyl tiles. And another baby.

(I think you can guess where this is going.)

After getting the older two to school, in the short time between feeding sessions, and while the baby slept, I found myself on those floors again. “I can’t believe I’m still here,” I’d whimper. But I was too tired to be anywhere else. Too frustrated at the mounting piles of laundry. Too anxious about getting through the day and then facing school pick-ups which was like the greatest feat ever. Getting out of my pyjamas for the 20 minutes I’d have to put together coherent sentences with the other moms for whom diapers were a distant memory was the most cumbersome part of my day.

Today, I don’t have a baby. I have two children and a toddler. And while the tears aren’t completely dried up, the faucet is moving toward a slow drip. I see the light at the end of the tantrums; my 7 year-old and 5 year-old remind me every day that these years are soon to be memories I may or may never get around to printing in photobooks.

Now the kitchen floor is where I play with my toddler, watching her amazement as she picks up crumbs between her thumb and forefinger. I toss her a twig of parsley while I chop vegetables at the island above her. She plucks at the leaves, enthralled. And dinner can sometimes be made in relative peace.

When I lean against the dishwasher now, it’s to FaceTime with my bestie while the spaghetti sauce simmers, my eldest child reads her book, my middle child crashes cars in the living room and my toddler discovers the world.

This is now my view from the kitchen floor.