Want To Watch The Oscars? Do This

How To Enjoy The Academy Awards Without Interruption 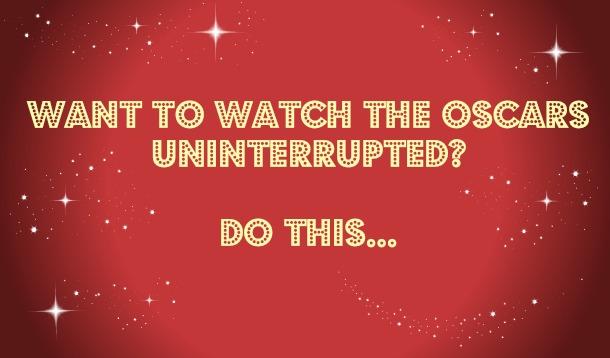 Christmas is the big holiday at our house. Every year as Christmas Eve and Santa’s arrival gets closer, I watch as my kids’ excitement grows. You can feel the energy in the air and their enthusiasm is palpable. They can’t sleep at night and their dreams are peppered with visions of their favorite day.

That’s how I feel about the awards shows. I love the fashion hits and misses, the interviews on the red carpet, the heartfelt speeches, the funny exuberant speeches and the corny musical numbers and jokes. But most of all, I love the “moments”. Almost every year there is a moment that leaves you welling up with tears of joy, your heart in your throat and a smile that can’t be stopped no matter what.

Who can forget Cuba Gooding Jr.s’ acceptance speech for Jerry McGuire or Roberto Benigni climbing atop the audience seats and how he hopped, HOPPED!, all the way to the stage when his win was announced. Or in 1996, when Christopher Reeve, best known for his role in Superman, appeared on the stage in his wheelchair less than a year after the horse riding accident that left him a quadriplegic. He received a minute long standing ovation and went on to present a film montage with a humour and grace I wish I possessed.

I could go on and on ...remember when Adrien Brody took full advantage of his shining moment and kissed Halle full on – hell…I would have too

And my kids keep freakin’ ruining it for me!

Would it really kill them to let me watch just ONE show? Just one? With no interruptions?

So this year I have a plan. And for all of you who have to keep your kids busy for a good two hours during the pre-show red carpet interviews and first hour of the show…I’m going to share it with you.

It’s a red carpet evening and even though you’re sitting on the couch in yoga pants and tee, there’s no reason why your kids can’t shine. Have them dress up in their Sunday best and hold their own little fashion show. Be sure to snap pictures of them with a digital camera so they can see just how adorable they look. Kids love that! They're kind of self-absorbed that way.

Tip 1: Make sure they don’t do their red carpet walk in front of the television – you don’t want to miss a great moment like Isaac Mizrahi grabbing Scarlett Johansson’s boob.

Tip 2: Do not try to do something like lay out a towel or sheet as a make-shift red carpet. The kids will trip, break an arm and you’ll find yourself trying to watch the awards ceremony at the nurses’ desk in the ER. And take it from me, the reception is bad.

Estimated time before they get bored: 30 minutes for getting dressed and parading around.

I've created a word search you can download and print off to keep your little munchkins busy while you watch the red carpet drama unfold.

2) Red Carpet Word Search (PDF)
Originally I was going to make an Red Carpet Bingo Game using commonly heard phrases during awards shows but then realized that would mean the kids would have to stay up and watch in order to play. And that's not gonna happen. You know the minute Meryl Streep wins Best Actress they'll start asking questions. Who's that? Why'd she win? What's she saying? Blah blah blah. So I changed it to a word search instead. Not too much instruction on this one. Click on the title above and print off this super easy word search. The winner gets an award. A bonus award goes to the older siblings who help the younger ones so they stop bugging you.

Estimated Game Time Before They Get Frustrated and Freak Out: 10 minutes

We've now gotten you through the pre-red carpet interviews – see how easy that was? But we've still got an hour to go so...

Bring on the Snacks

I don't know about your house but nothing shuts my kids up faster than food. I mean, not at dinner time because they won't actually eat anything I make without complaining, but give them a snack and they're on it.

Awards shows = movies so it's important to have movie themed snacks. You'll waste at least five minutes trying to explain this to your kids and even then they won't get it. But once they hear the list of snacks, they won't care.

The snacks are finished, there's still 45 minutes left before the kids go to bed and now they want you to read them a book. Hey! Is that Jennifer sitting behind the Pitts?

Fear not moms, I've still got one last trick up my sleeve.

Get out some colouring books and when the kids go to get the crayons, run and put the clock forward 40 minutes.

There you have it – quick and easy ways to keep your kids busy while you watch the show and dream about what you'd say in your acceptance speech.

Ha! Busted! You know you do it.