Men Are From Mars, Boys Are From Uranus

I'm outmanned in my household by space aliens. 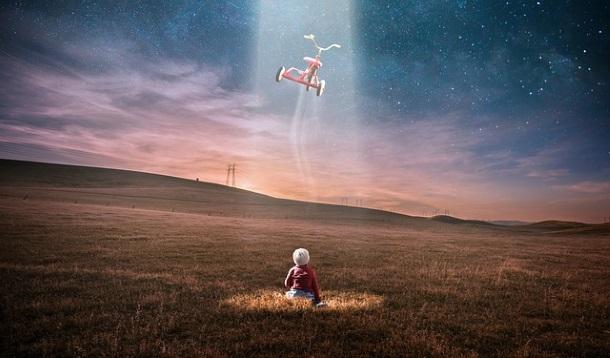 My son, I think, was about four months old when I realized I was in deeper doo-doo than I thought. One day, in the middle of a diaper change, he discovered that he had his very own personal grabbable handle, conveniently placed at hand-height.

You know that old saying: men are from Mars, women are from Venus. We might be biologically related, but when it comes to some things, we're about as alien to one another as we can get.

Despite our lack of a floppy appendage, Venusians would have to be hiding under a rock not to know about how much it preoccupies Martians. But just in case I had forgotten that I was married to one, I was forewarned by many moms of boys before me that, even before discovering video games, they'd spend way too much time playing games with their "joysticks."

Babies are grabby of all things, so I thought was eminently prepared. What I was not prepared for was for the baby Martian to take both rod and tackle in his iron-chubby-fisted grip and yank on it till it stretched nearly to his sternum. And nope, rumors of it being "highly delicate equipment" aside, being Stretch Schlongstrong didn't seem to bother him at all. It bothered me, however. I didn't even have a relateable fleshy part, and yet I could still distinctly feel the phantom pain of it trying to retract into my body.

Other Venusians more gifted with words than myself might have said something more appropriate like "no," or "You're hurting youself." After 3 seconds of stunned silence, what I managed to articulate was "Stop! You might want to use that someday!"

However true that might have been, I regret that I was in hearing distance of a Martian at the time.

Also in retrospect, I got off lucky; standing over a naked baby boy on a change table with your mouth gaping like a fish for any length of time is just asking for trouble.

As a Venusian, I've always prided myself on being... well. Perhaps not so flamboyantly Venusian. I can't remember the last time I wore a dress, I can belch with the best of them (aided in part by gluten sensitivity, but hey, silver lining), and I'm pretty sure I'm allergic to shopping for shoes. I've always felt that I've meshed well with the Martians. I've prided myself on such things as being able to remain logical in the face of raging PMS, calmly answering questions about melting down with "NOTHING IS WRONG. IT'S HORMONES. BUY WINE, TELL ME YOU LOVE ME, AND ORDER PIZZA. ALL WILL BE WELL" at the top of my lungs.

Martians may be dense sometimes but they're relatively obliging.

Martians appeared to be as baffled by their young as Venusians are, however, so Mars appears to be either a colony of immigrants, or they all have been afflicted with some sort of adult-onset amnesia. This is how the Martian convinced me to be the one to go to the doctor and ensure that the little space alien's... um... docking equipment... took no harm from such rough treatment.

Unfortunately, the doctor was also a Martian.

When he was about 3, baby boy wrote his very first poetry slam. It was called "Poop! Pee! Diarrhea!" Perhaps predictably, the words consisted exclusively of "Poop!" "Pee!" and "Diarrhea!"

"WHAT'S YOUR KID YELLING UP THERE?" hubs yelled from the basement during the first (of what would be a frequently repeated) performance.

"MY KID? HE'S 50% YOUR GENETIC MATERIAL AND BIOLOGY TOLD ME HIS DANGLY PARTS ARE YOUR FAULT" I logically responded (yelled).

"It's about POOP!" my son chimed (yelled) in helpfully. And then he dissolved into a fit of hysterical giggles.

Since the Martians seem to have adult-onset amnesia about how reproduction works, and based on their obsession with all thing scatological, I came to the conclusion that boys are from Uranus.

Fast forward a handful of years; my little Uranian is perilously close to the age of puberty. I had put my foot down ages ago to the resident adult Martian that he would instruct the Uranian in all things dangly and I would be responsible for all things... not.

To me, this seemed eminently logical and fair at the time. But somehow that translated into him instructing in the cleaning of the dangly and how to point it at a toilet (easy) and my part being a full explanation of the entire reproductive process, from the unique physiological characteristics of both boys and girls, to sex, to the general mechanics of reproduction. Given that the Uranian had just turned 8 (also known as "The Age of Cooties") when we decided to get into a more comprehensive explanation of the mating habits of humans, he also demanded an explanation of WHY anyone would want to do such a thing.

By the time I got to this point of the hour and a half explanation, I have to confess, I was wondering the same thing myself. The Martian helpfully provided the answer: "We're stupid."

I've come to realize though that no matter how logical you are as a Venusian, it does not bridge the gap... well, at all. Being in a house outnumbered by space aliens is challenging, particularly when it comes to communication. As you might have guessed, Martians are relatively simple, literal creatures, and Uranians can be pedantic to the point they will get in an argument with you when you say it's 6 o'clock and the microwave reads 5:58. Martians call themselves logical beings, but it's like a difference between two dimensional logic and three dimensional logic. We'll be looking down a straight road, like "Should we have more children?" And the Martian, whose brain is apparently already operating somewhere in the stratosphere will return with "is it safe for pregnant woman to eat tacos?"

Uranians? Their logic defies order the way Star Wars defies all the known laws of physics in the universe.

Me: "Did you get your homework done?"

Uranian: *eating pepperoni* "No, not yet. Oh! This is so spicy. How anyone can eat it?"

Me: "Well, with a lot of food, you're supposed to alternate it with bites of other food and enhance the flavour of both. You can pair things like pepperoni together with--"

Uranian: *stuffs the entire remainder of pepperoni stick in his mouth* "Mom, do aliens have machine guns?"

One thing I can say for sure, life with a Martian and Uranian sure keeps me on my toes.

RELATED: The Challenge With Raising Boys . . .