Why You Should Watch "The Marvelous Mrs. Maisel"

Make this your new bingewatch 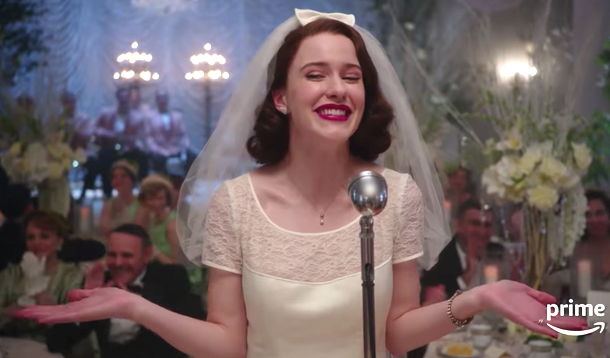 ***The following article contains spoilers from The Marvelous Mrs. Maisel***

One of my favourite TV Shows won five Primetime Emmys and two Golden Globes in 2018, and the majority of my friends or family haven’t even heard of it.

The Marvelous Mrs. Maisel, created by Amy Sherman-Palladino, the brilliant mind behind Gilmore Girls, offers a stunning and binge-worthy piece of entertainment that everyone should watch. But many Canadians (or at least the ones I associate with), have no clue how to access the show.

Mrs. Maisel is a period comedy-drama starring Rachel Brosnahan, of House of Cards fame, as Miriam “Midge” Maisel. It’s 1958, and Midge is a young Jewish housewife living an idyllic life with her husband and two young children, in a chic apartment in the Upper West Side of Manhattan.

In a surprising turn of events, Joel Maisel (Michael Zegen) walks out on Midge and their two kids, blindsiding their entire family, and forcing Midge to come to terms with her not-so-idyllic home. In the process, she discovers her independence, and uncovers a secret talent that she begins to nurture and develop: Midge is a bold and talented stand-up comic.

Sherman-Palladino was inspired by her own comedian father, and her childhood hearing stories about the comedy scene in Greenwich Village. Midge takes cues from real pioneer comediennes, including Phyllis Diller, Joan Rivers, and Totie Fields.

Everything about Mrs. Maisel drips late-1950’s nostalgia, and the entire show is like eye-candy to behold. Midge’s costumes are a collection of jaw-dropping 1950s era inspirations, from her pink tweed suit, French-couture dress with matching coat, and her impeccable gloves and fascinator. Midge exudes perfection, influenced by an era where presentation and a beautiful smile go a long way - covering up inner turmoil with the perfect shade of lipstick is natural.

The Maisel family apartment is enormous, even by the standards of New York City apartments, and tastefully decorated, too. The nursery includes a Jenny Lind crib, pink Pyrex are displayed in Midge’s sweet as candy kitchen (think: red candy apple trim and cupboards painted a pale tint of green). The home is symbolic of the perfect nuclear family that Midge has been so proud of, and plays in stark contrast to the dark and dingy Greenwich Village club where she performs stand-up in the evening.

The story itself is a stunning representation of womanhood and motherhood. Sherman-Palladino wanted to create an atypical 1950s woman. Mrs. Maisel is like a feminist love letter to the 1950s, and Midge is the icon who gets her second chance at life. In an interview with Variety Sherman-Palladino shares, “I wanted to do a story about a woman who thought she scored, made it. She has it all and then ‘Bam!’ It all falls apart, and in falling apart she discovers an ambition and a need to speak and a voice that she frankly didn’t know was there.”

For women everywhere, especially mothers, Mrs. Maisel is more than a simple piece of entertainment. It offers a statement about the culture of motherhood that advocates for the loss of self and ambition. We get to watch as a newly single mother takes control of her life, and gladly grabs at the opportunity to show the world what she’s made of.

Midge’s character, and the show itself, have some flaws. There’s many times where Midge’s two children are more little burden than little people, but perhaps that too is a statement of the 1950s characterization of children and motherhood. I refuse to buy into the idea that Sherman-Palladino truly believes that you cannot be a good mother and an ambitious woman, even if it seems that Midge favours ambition over motherhood. It’s also telling, how judgmental we are of Miriam’s choices, while giving her runaway husband a pass where the kids are concerned.

As of December 5, the second season of The Marvelous Mrs. Maisel is available for all of our binging pleasure, and I cannot wait to find out what Midge is up to next. Midge, as fictional as she is, embodies the spirit of perseverance and belief in yourself, and she makes me want to run after my own dreams too.