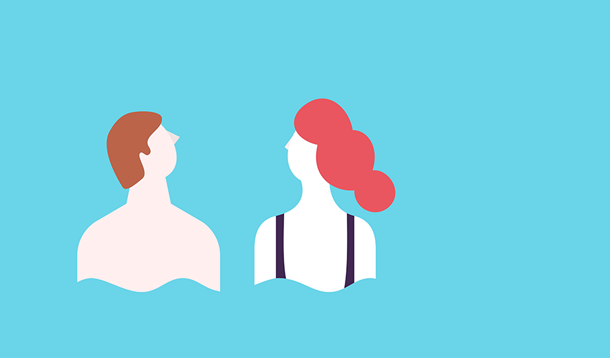 Picture it: A heterosexual celebrity couple walks on the beach (it doesn’t matter who, they all blend together). They are laughing and having fun, as people do, and because they are famous, they draw a crowd even though they are not doing anything more interesting than anyone else on the beach that day.

Of course, they also draw paparazzi, eager to grab some perfect shots of the scantily clad couple doing normal, human things. The couple are on vacation together – they are doing things together. The photos of each of them are taken at the same time in the same place. Would you assume the headlines and captions that accompany them would be similar? Of course, right?

Well, you’d be wrong, Pam, you’d be wrong. You made the unfortunate error in giving the world the benefit of the doubt not to be sexist assholes. Were you to open your magazine (or browser) to check in on this couple, you would find that “He” was catching some waves that day, while “She” was flaunting her bikini body.

This difference in language surrounding people of different genders is not new (and this is without touching on the language used to describe non-binary people, which deserves an article unto itself). It seems that a woman wearing clothing, any clothing, is always, “showing off” or “flaunting” whatever it is that is covering her body, as though her reason for stepping out the door that day was to model her wardrobe.

If her clothing shows a bit of skin, sometimes it gets switched up a little, and instead of flaunting her clothes, she is flaunting her body (only if it is thin and toned, of course, or if she has lost some weight – especially baby weight).

If a woman is not slim, and she wears clothes, she “looks stunning” in whatever she is wearing – that’s what makes the headlines. If she is fat and in a swimsuit, she is either “shocking” or “brave” depending on the publication, neither of which any fat woman wants to be considered simply for existing in a bathing suit.

The differences in headlines doesn’t stop here. Consider something as simple as grey hair. When men go grey, they seem to get sexier. Remember when Steve Carell stopped colouring his hair? The internet lost its shit while everyone suddenly discovered that “Michael Scott” is hot. “Silver Fox” is the most common phrase used to describe men who allow their grey to show.

Female celebrities, and women in general, are rarely called sexy for going grey. Like with “existing while fat,” female celebrities who go grey are portrayed as brave. Most often, they “dare to go grey,” or if they colour their hair and say so, they “admit to going grey,” as though it is a shameful secret.

These differences have even permeated the athletic world. Media surrounding female athletes have sexist undertones not present for male athletes.

I know it seems pedantic. I get that in a world where people are speaking out more, it seems like everyone is offended by everything, and some of you may be rolling your eyes about now.

The thing is, language matters. Words matter. Connotation matters. By reducing women to their clothing, or their bodies, or their hair colour, while allowing men to have a much broader identity, we send countless subtle messages that affect the self-esteem and body image of women, particularly young ones. One message, one headline, one comment may seem pretty innocuous, but when they become ingrained in all media, they become ingrained in culture and in the way we see ourselves.

If we focus only on obvious sexism, we will never change the culture that supports it. We have to start with individual words. We have to address the approach we take when we report on male, female, and non-binary people and bodies. Each headline written, each photo captioned, each comment made, we need to consciously stop and thinking, “If a teenager heard this hundreds of times, what would be the effect?” Sound absurd? It’s not. It’s the reality of these insidious micro-aggressions, and it’s the only way to stop them.

To journalists and editors – this is on you as much as your readers. Focus on the whole person. Allow women the same autonomy as men. Simply put – do better.