Do You Have to Give Up Your Favourite Things if the Artist's a Bad Person?

We need to start thinking about whether or not we will continue to support their work when our idols fall. 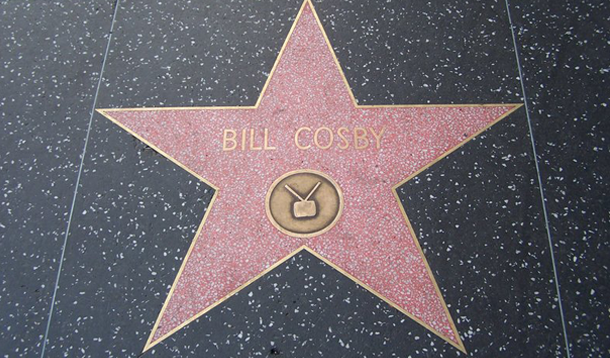 You’d be hard-pressed to find a better example of a fallen idol than Bill Cosby. Once considered America’s father, the epitome of family values and morality, Cosby’s new moniker is sex-offender.

On Thursday, a jury of his peers confirmed what many women have been saying for years: Bill Cosby is a rapist. After being found guilty on three counts of aggravated indecent assault, Cosby let leash a expletive-laden outburst at a prosecutor who sought to revoke his bail. A far cry from the wholesome image of the man we grew up with.

So what now? Cosby has few allies left. Almost universally, the reaction to his guilty verdict was relief and joy. The public gave up on him years ago when it became clear these accusations were true, and we all feel vindicated on behalf of his victims.

We are reconciling our transition from viewing him with admiration and affection, to looking down on him condemnation. But what do we do about our genuine love of his work? Bill Cosby is a monster, but Cliff Huxtable is a loving father.

Is it okay to still watch the show? Can we even still enjoy it? Is it possible to separate art from artist? My husband thinks so, at least in the case of Cosby. The Cosby Show is one of his most beloved TV shows, and giving up something that is part of him because of the horrible actions of one man, seems unfair. My 10-year-old son also loves the show, and we love the messages the show sends him. It’s a far better quality show than a lot of the sitcoms currently on TV.

To enjoy it, my husband has to employ a bit of suspension of disbelief. He has to view it as Cliff the character, not Bill the rapist. My son had heard some of the controversy, and my husband explained to him that the actor who played this character is a bad man who did bad things to people. He is able separate the two while watching the show he grew up with.

Then there is the issue of the other actors and crew. Malcolm Jamal Warner, who played Cosby’s son Theo on the show, spoke out in 2016 when the allegations came into the spotlight. While he condemns his former co-star, he noted that the controversy was “literally taking money out of [his] pocket.” Reruns of the show being taken off the air meant he was no longer receiving residuals for it. He was paying, literally, for the actions of another man.

He also pointed out that while his show was taken off the air, the works of other accused sex-offenders like Woody Allen, Roman Polanski, and Stephen Collins, were still celebrated.

Warner pointed to the legacy of the show that stands despite the fall of its star. “Its influence on a generation of young people who went out and sought a higher education because of the show, a generation of people who have gotten married and focused on having loving families because they were influenced by that show, that part cannot be taken away. You can’t reverse any of that.”

It is for exactly that reason we allowed our son to watch the series. The man is bad; the show is good.

And the issue of how these inexcusable acts impact their fellow actors and crew is neither small nor simple. When Kevin Spacey was accused of sexual assault, Netflix initially cancelled his show House of Cards. This is a fair action against Spacey, but put hundreds of innocent people out of work. Amidst public outcry, Netflix reversed the decision and allowed the show to stay on the air, minus Spacey.

With the #MeToo and #TimesUp movements having a clear (and wonderful) impact, more predators who are also artists will be flushed out. It’s likely we will see more of our idols fall. We need to start thinking about whether or not we will continue to support their work when it happens.

It seems we all have a line we won’t cross. My husband is unwilling to let go of The Cosby Show, despite his abhorrence for Bill Cosby the man; but he categorically refuses to listen to Chris Brown’s music. It isn’t that he thinks Cosby is forgivable and Brown is not, he condemns both men wholeheartedly, but he is able to reconcile the Cosby Show in a way he can’t Brown’s music.

I was crestfallen when members of Hedley were accused of sexual assault. I enjoy a lot of their songs, and some of their music was my go-to when I needed some motivation. But I began my boycott of them with little more hardship than some disappointment. I’m having a much harder time dealing with the accusations against Johnny Depp, whose work is far more ingrained in my psyche than Hedley’s.

I will judge anyone who actively supports Bill Cosby the person, Kevin Spacey the person, Harvey Weinstein the person. Their identity is now and should be sexual predator before artist. But I can’t condemn anyone for continuing to enjoy the work they helped create. It’s complicated.

For now, I will take it on a case by case basis and go by my comfort levels. I’ll never stop speaking out against predators like Cosby; but will I continue to enjoy their work? The jury’s still out.

RELATED: What to Tell Kids About Sexual Assault