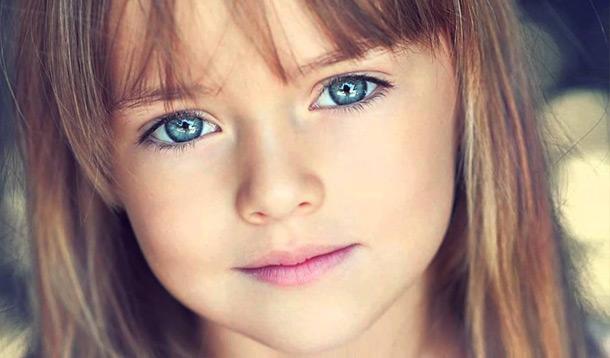 Have you heard of Kristina Pimenova? I hadn't, either. Woman Daily Magazine called her "the most beautiful woman in the world." The Russian model's Facebook page has more than 2 millions likes. Oh yeah, and did I mention she's nine?

Krisitna is pretty in that wide-eyed way that nine-year-olds are. Her angelic face is popping up everywhere—from Dolce & Gabbana, Armani, Benetton, Roberto Cavalli and on the cover of Vogue Bambini. The fact that she is modelling isn't my beef. I once had a friend whose children held lucrative modelling careers before they could walk. (Let's face it, some people are just born with glorious genes.)

And while it was kind of weird to see them on Johnson & Johnson commercials (with a mom other than their own), they seemed to be having fun, or at least they didn't seem to mind much. And at least, unlike everyone else's kids, they were set with a plump college fund by the time they hit puberty.

But—and here's the three-letter deflator—unlike little Kristina these kids didn't have "fans." They didn't have a social media presence that caused otherwise sane people to slobber all over their keyboards. After all, the modelling isn't the problem. The professional shoots tend to see Kristina fresh-faced and sporting clothes suited to her age.

Even though her mother Glikeriya Shirokova - Russian model in her own right - screens her daughter's Facebook account, and promptly deletes anything "inappropriate," it's still a rather gross affair. It's her mom, after all, who posts the photos of her daughter that have child advocates freaking out.

Kristina's adoring masses on Instagram (around 329,000 them) gush at every picture mere seconds after posting. Guys lust after her Lolita-style, while gals long for a prepubescent look they have scant hope of achieving.

What You Need to Know Before Your Kids Start Modelling

"There is something very wrong—and creepy—going on when fashion has become so divorced from reality that a flat-chested, prepubescent, hip-less young child is a style icon," writes Amber Robertson of Essential Kids. "I do wonder what messages it sends to young girls, that to be an icon all you have to do is be pretty... When do these little child models get a chance to dress down, hang out with kids their own age and have fun?"

As I said: gross.

Kristina's mom clearly can't hit 'delete' quick enough to remove wishful comments about her daughter having a future with Victoria's Secret one day.

The possibility for abuse of these images is monumental based on their appeal and sheer reach. If people think otherwise, I'd suggest they're deluding themselves. Kristina's social media pages are a slice of pedophile heaven, and as one Instagram user pointed out, what's primarily disturbing about that is the fact that her own mother seems to be running the show.