Are These Target Baby Sleepers Sexist? 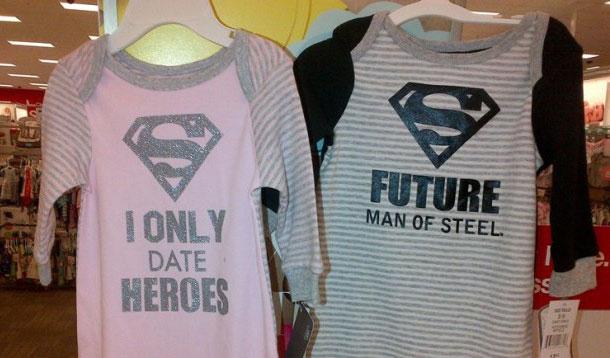 Sexism starts early, like really early. At least it does at Target, which found itself the target (sorry) for much consumer wrath for selling sexist onesies—pink ones for girls, "I Only Date Heroes" and blue for boys, "Future Man of Steel."

"It seems kind of ridiculous to talk about who an infant girl is going to date," said Aimee Morrison, an associate professor of English at the University of Waterloo.

And ridiculous that 'boy clothes' are still predominantly blue and 'girl clothes' pink, when as grownups women confidently wear blue all the time and men, increasingly, wear pink dress and golf shirts.

And while I'm at it, the whole Superman logo is a bit tired. Yes, even for sleepers worn by three-month-old babes. Does anyone out there still think sleepers with such motifs are adorable?

Christine Logel obviously doesn't. The associate social development professor at Waterloo spotted the onesies while out shopping for her kids, and was stopped in her tracks.

Together she and Morrison posted the image to Twitter, where users slammed the sleepwear and recounted other examples of questionable attire. One commenter hailing all the way from Spain recalled a piece of girl's clothing marked, "Beautiful like Mommy" and a boy's "Smart like Daddy."

So gender stereotyping in rampant in kids' clothing. Some users admitted there were "more important problems in the world." True, but if consumers fail to point out what they find unacceptable, nothing changes.

Predictably, Target welcomed the feedback from its valued customers; however, until people are willing to avoid shopping at certain stores (or at least quit buying up sexist items), stores are unlikely to take any stock whatsoever. The only way to truly reach a retailer is via their profit margins.

You tell me: are these sleepers sexist or are people overreacting?

I was left wondering why this show still exists in the year 2014.