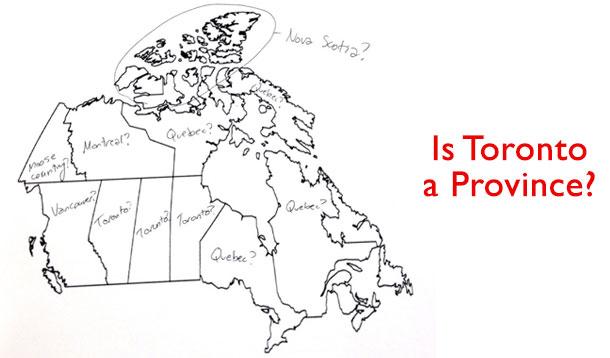 Oh, my. It's Canada Day, and in an attempt to show some compatriot love to their northerly neighbours, the BuzzFeed editorial team endeavoured to label a map of Canada.

It's a long-standing joke that Americans know precious little about Canada. Stereotype? So how did the Yanks fare in their Canuck test? Have a look for yourself. Pretty abysmal, eh?

For a start: Toronto is not a province—nor, for that matter, is Vancouver. Really, if you care about the Land of Rob Ford as much as your late-night TV coverage would suggest, then at least get Toronto (sic) Ontario right. (And no, there is no such thing as 'Canadaville' or 'New Canada.')

Some respondents were quite creative in their endeavour, labelling mass patches of land after native animals: bears/moose/elk. Others marked the map according to cultural flavour (see 'Drake' and 'Weed', the 'Maple Syrup Fields' and lest we forget, the central province of 'Hockey').

Another personal favourite (the 'U' is not a typo) goes to the person who spotted a hidden llama. But the absolute best gets saved for last...

Though I presumed American-Canadian relations had evolved somewhat over the years, I'm sorely disappointed by the performance of the BuzzFeed crew. Not a single person correctly labelled our biggest province: Justin Bieber.

Get the best that our national holiday has to offer...