It could be nothing... 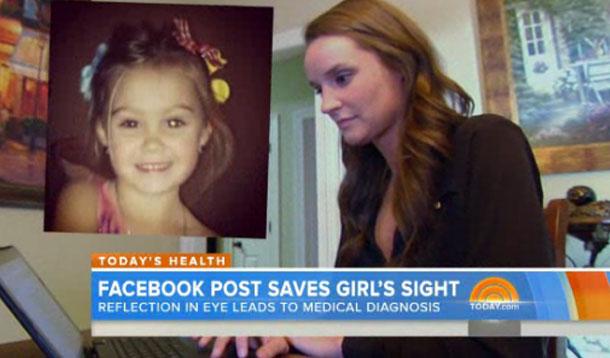 There you are, yet another parent posting yet another cute photo of your kids on Facebook. *Yawn* But what if, instead of blindly 'liking' the picture, a user spotted something that might save your child?

According to an article in Today, Tara Taylor uploaded a shot of her daughter Rylee's cute new hair style to Facebook. So far, so innocuous. But a friend got in touch and alerted her to the strange glow coming from the three year old's eye.

“I just texted Tara and told her, ‘Hey, it could be nothing, it could just be the flash, but there could be something wrong with Rylee’s eye,’” said Stacy Carter.

Concerned, Rylee’s parents took more pictures, before taking their daughter to a retina specialist. Sure enough, the little girl was tested and diagnosed with the rare Coats disease, in which dilated blood vessels in the retina leak fluid in the eye. If undetected, the one-in-100,000 condition can cause retinal detachment and blindness.

Tara Taylor was stunned to find her daughter could not see out of her left eye. Though her vision is not likely to fully return, Rylee has regained some peripheral sight due to laser treatments and injections.

Her parents are simply grateful her friend was paying attention to her Facebook feed that day.

Wondering when to have your child's eyes tested? Read on...