The Modern Day Birthday Party Etiquette Refresher We All Need 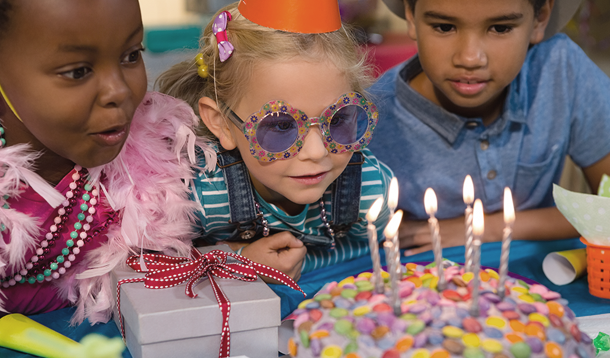 As the school-year winds down, so too do our child’s invitations to their classroom chums’ birthday parties. This year we hosted the first party where my older son (now five) picked most of the people invited – all from his junior kindergarten classroom. We know a couple of them, along with one set of parents, reasonably well but, beyond that, they were more or less strangers.

On the big day, we were surprised to discover that some parents stayed at our house (where we were hosting) while others dropped their child off and promptly left. Caught a little off guard, we made the best of it and thankfully everybody left in one piece (which was no small feat considering we had fifteen kids, a bouncy castle, a full-size trampoline, and a backyard in desperate need of levelling!).

Afterward, it made me think a little about “Birthday Party Etiquette,” if you will. Is there such a thing? Should there be? The birthday parties of my childhood seem so blissfully carefree in my memories. As only a child can be, I was in dreamland; a veritable ignoramus about all the prep work and social navigation that undoubtedly took place on the other side, even back then.

So, armed with some data obtained through polling a group of parents on Facebook, I’ve narrowed down three main “Lessons in Etiquette” when it comes to the modern-day birthday party:

To stay or to drop-off

Generally, for kids younger than six it is appropriate to assume that you will be staying, unless you’ve been told that you’re free to leave. Even if it is a drop-off party, consider both the nature of the event and the temperament of your child before deciding. Is the party adequately supervised by adults? What activities will the kids be doing?

If you have a more difficult child to manage, might it best to stay on and lend a hand? For kids older than six or so, it’s fairly safe to assume you can drop them off.

In either case if you’re unsure, just check in with the hosts.

Ah…the dreaded loot bag! I get it. Few of us care for the little what-nots stuffed inside a plastic bag, all of which will invariably end up underneath the furthest corners of your sofa.

You know the stuff I’m talking about: Tattoos, stickers, mini paw patrol Frisbees. Just because stuff is colourful and affordable in bulk doesn’t make it a good idea. But few things illicit as much pure, unadulterated delight for a child than receiving a loot bag at the end of a party (Note: Adults love them too – they’re called “swag bags”).

It’s not really about the stuff inside. It’s about the thrill of getting one and discovering what’s inside. It’s healthy and it’s normal. Don’t rob kids of that experience. Instead, stick with functional, practical, and healthy loot bags.

Last year, we had a superhero themed birthday party at my son’s request. I ordered twenty superhero capes from Amazon for thirty dollars for the kids to wear during the party, and they each got to take it home as their 'loot bag.'

This year he asked for a 'hover board' party (???). I bought fifteen foam kickboards for three dollars a piece and used them as part of the décor. Each child took one home at the end of the day (what five-year old doesn’t need a kickboard for swimming?).

Hands down the best loot bag I ever received was a bag with some Bonne Bell makeup in it, when I was nine or ten. I used every last piece, and it was awesome.

When it comes to opening any gifts in front of guests or later, people's opinions are mixed.

Some feel it’s too time consuming and chaotic, others feel it can be alienating (i.e. guests who give more expensive gifts than others, or clear favouritism for some gifts over others by the child), and still others believe it’s an opportunity for givers to see the look of joy on the recipients face when they open it.

Personally, I believe it depends on age and group size. For children younger than five, best to open them later in the interest of time (and total bedlam). For children five and up, with a smallish group (say eight kids or less), I say open them while they are there. It’s part of the event. Just like us, children look forward to experiencing the emotion on the person’s face they are giving the gift too.

As Deepak Chopra once said, “Giving connects two people: The giver and the receiver.” Rather than shield our kids from the realities of differences in income and the (totally human) inevitability of preferring some gifts over others through avoiding this, let’s teach them to be non-judgmental, grateful, and kind in the face of these realities instead.