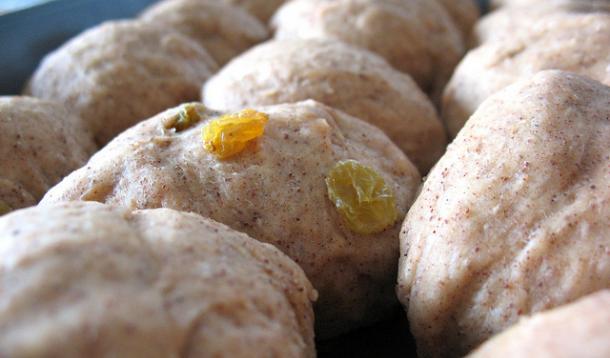 Years ago, I used to buy hot cross buns from a local bakery. They were so tender and delicious, it was hard to resist, but the problem was that at almost $1 a roll, they also became an expensive habit. Not to be outdone, I experimented and searched until I found a recipe that allowed me to make a comparable batch at home. These rise up sweet and delicious, ready to be served with your Easter ham or while the kids are hunting for chocolate eggs.

Tip: I think it's best to keep about 1/2 c to 3/4 c of the flour aside, just adding it in as you stir/knead until the dough is smooth and elastic.

1/4 cup chopped mixed candied peel (I don't like peel, so I sometimes throw in a bit of extra raisins instead.)

Dissolve 1 tbsp of the sugar in warm water, and add the yeast. Let it sit for about 10 minutes, giving the yeast enough time to foam and bubble. Meanwhile, in a large bowl, whisk together the flour, cinnamon, nutmeg, cloves, and salt. Set aside. In a separate bowl, whisk together the warm milk, melted butter, and eggs. Make a well in the center of the flour mixture and pour the milk mixture in. Add the yeast mixture and stir until a soft dough forms.

If you don't have active dry yeast, but instead have instant yeast, add the dry yeast to the flour mixture, and the warm water to the milk mixture. Just blend wet and dry ingredients as above and proceed as usual.

Turn the dough out onto a lightly floured counter and knead for about 8 minutes, or until smooth and elastic. Rub butter all over the inside of a large, clean bowl and put the dough inside, turning to grease all over. Cover it with plastic wrap and set inside the oven, with the light turned on, for 1 hour. This will keep it nice and warm. The dough should double in size.

Take the dough out and on a lightly floured counter, punch it down and knead in the raisins/currants/peel. Shape into a log and pinch off about 12-15 pieces, shaping and stretching until each one is shaped like a ball. Place in a greased 9x13 inch metal cake pan. Cover with a clean tea towel and return to the oven, with the light turned on, to keep the dough warm.

Remove them from the oven and turn it ON to preheat to 400F. When ready, bake the buns for about 15 minutes or until golden brown.

After you remove the buns from the oven, prepare the glaze by dissolving the sugar in water over medium heat. Brush over hot buns. Allow the buns to cool completely.

When the buns are cool, mix the icing sugar and water together in a bowl. Spoon into a ziplock baggie, snip one end, and pipe icing in an x shape on top of each bun.