The Heartbreak of Seeing Rape Culture in Nostalgic Movies

Well, this is disappointing 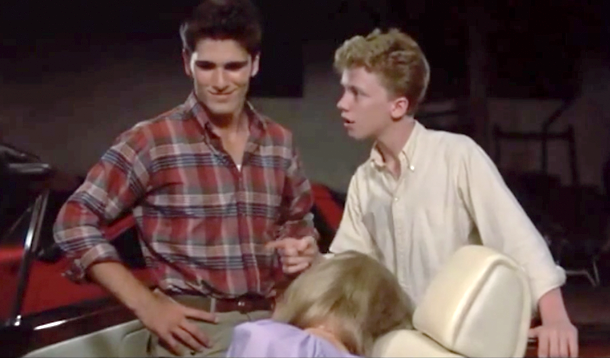 “I can get a piece of ass any time I want. Shit, I got Caroline in the bedroom right now, passed out cold. I could violate her ten different ways if I wanted to.”

“What are you waiting for?”

Do you recognize the movie? I’ll give you a hint: These were the good guys in the movie. I’ll give you another hint: Instead of Hero #1 violating unconscious Caroline, Hero #2 drives her home and takes pictures with her posed like they had just had sex, so he could brag to all his friends. I’ll give you a third hint: Hero #1 is widely thought of as one of the most romantic characters in movie history, and we all hoped we would be lucky enough to find someone just like him when we became teenagers.

Give up? It’s Sixteen Candles. That sweet, charming little movie about the poor, plain, forgotten teenage girl who falls for the popular boy with the popular but mean girlfriend, and despite everything stacked against her, wins his love in the end. Aww, like liquid sugar it’s so sweet.

Well, except for all the rape stuff. I didn’t remember than scene from when I was younger. When it came on the TV the other day, and I saw that scene with 38-year-old, 2018 eyes, I almost threw up. It was said so casually. And his reason for not raping her wasn’t that it would be wrong, in fact, according to The Geek’s response, it was a great idea. He didn’t rape her because he preferred Molly Ringwald. That’s all. And we all thought that was so swoon-worthy when we first fell for this movie.

When my oldest son turned ten, I was excited to start showing him all my favourite movies from my childhood. We started with children’s classics, like The Neverending Story and The Labyrinth, then we moved on to Brat Pack and other 80s and 90s movies. Nothing will make rape culture pop out to you like watching it with your child.

A running theme in these movies is that if you push a girl hard enough, she will eventually fall for you. Or conversely, if you are a girl who is demure and self-deprecating, the perfect guy will go for you; but if you are sexually active or forward, you will be used for sex and eventually discarded for the “nice girl.” It’s absolutely horrible.

My first inclination was to cancel our viewings. This is not how we are raising our sons. I will be damned if I’m going to teach them that entitlement to women’s bodies pays off, or that ignoring boundaries set by women is romantic (looking at you Mr. John “I attract rain” Cusack).

Then, I began to consider why I didn’t remember any of these scenes. I didn’t remember them because I didn’t know at the time that they were horrible and wrong. I accepted them as part of the romance narrative and didn’t question them. My mind stored them in my memory as romantic, not as rape culture. That’s when I realized that worse than showing my son these examples of rape culture would be not showing them to him – to allow him to remain ignorant of what subtle messages of rape culture look like, and how they weave their way into otherwise normal situations, making us accept them as normal as well.

So we watched the old movies. And every time an example of rape culture showed up, I labeled it. I told him why it was problematic. I did the same for the racist, sexist, and homophobic messages that plague those movies too. Doing so didn’t ruin the nostalgia of the movies, or the bonding time with my son. It taught him to watch things actively, not passively, and think about what he is watching.

And it worked. Whenever we watch any program, not just a nostalgic one, he catches the messages often before I do and calls them out himself. He frequently offers up what should have been said or done instead. Instead of learning the vague concept of rape culture, he can pinpoint exact examples, and he watches for them. Each one he catches, and each one he counters, inoculates him against the ones he will inevitably hear and see in real life as he gets older. He is forming a solid foundation of respect for other people’s bodies and boundaries, and well as his own.

I do not regret showing him these movies. In fact, I better stock up on popcorn for when his little brother is old enough for a movie marathon of his own.