I wanted the original one from my childhood. Then I had children. 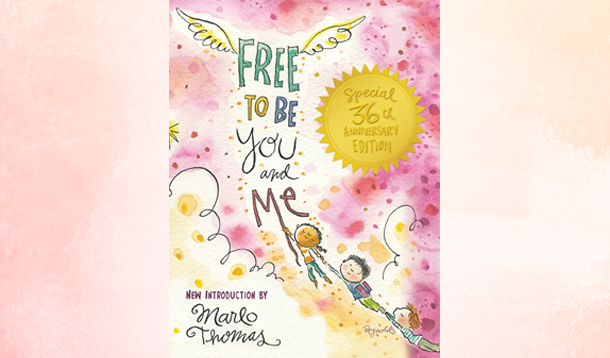 The first time I saw Free to Be…You and Me it was on a film strip. My mom was a teacher, and it was one of her classroom essentials. It was about 1985, making me about five, and what would become my fierce fight for equality was a mere twinkle in my eye then.

I didn’t really get how important Free to Be was from a political and social standpoint. I just knew it had fun songs, and it had babies in it. Anything that had babies in it was good with me. I had, after all, rented the VHS cartoon of how babies were made 156 times simply to see the cute baby at the end. So, unwittingly, my love of babies was giving me a great feminist foundation (and apparently a firm grasp on sex education.)

I didn’t know any of the people in there, or that they were some of the biggest celebrities of their time. I didn’t get the significance of Rosey Grier saying it was okay to cry. He was this big, funny-looking guy, singing a pretty song. How did I know he was a well-respected and manly football player, and that his discussion of showing feelings was ground-breaking?

But the message got through to me anyway, as good quality children’s entertainment does. I was learning without even realizing it. I’d like to think that my attitudes toward gender now, and my push for things like gender-neutral toys, were influenced by my love for this movie during my formative years. Perhaps my boys play with dolls now because “William” played with dolls then.

As I got older and my awareness of the history of Free to Be grew, my fondness for it did too. I asked for a DVD of it for Christmas in my 20s. I don’t know how she did it, but my mom managed to find one. I found the CD as well. And I picked up an anniversary edition of the book, with illustrations and stories updated to reflect the 2000s instead of the original 70s one.

At first, I was annoyed by this update. Free to Be was perfect and should be left alone. I wanted the original one from my childhood.

Finally, I figured it out. The movie is grainy. It’s dated. Not only does he not know who any of the people are, it doesn’t look like anything he has ever seen before. The movie that was once so relatable looks and feels completely foreign to kids today.

But the book was updated. It had modern-looking illustrations. It had a few new stories that pertained more to issues kids today face, like texting and computers. But the originals were in there still, and the message still as clear: people are not defined by gender.

I have seen the argument that while a necessary message in 1972; it’s unnecessary to keep pushing this agenda now. That’s false. As a preschool teacher, I have had parents tell me not to let their sons play dress up or play with the dolls. I’ve seen boys told to man up and stop crying. I’ve seen girls valued by their looks over their minds. It’s as imperative a message as ever. Yes, we have made strides; but we have a long way to go.

What made Free to Be especially noteworthy at the time was its treatment of men and boys. It’s true, Women’s Lib and equality for women was the movement, and rightfully so; but Marlo Thomas included the message to boys that they too can be things that aren’t stereotypically male. They can show emotions. They can play with dolls. They can be nurses. These messages benefit both men and women. And while we have come a long way in the “Women can be anything” attitude; men are still shamed for exhibiting feminine characteristics.

There is still a place for Free to Be. And as someone who absolutely hates when people remake my beloved children’s shows, I can’t believe I’m saying this; but I’d like to see a remake of Free to Be… You and Me. I want to see a movie with a mix of the classic cartoon segments, and a reshoot of the live action songs with current celebrities. Do I like Drake more than Harry Belafonte? Hell, no I don’t. But my ten-year-old does.

I’d like to see some of our current fantastic writers, like Tina Fey and Lin-Manuel Miranda, contributing new, hip material. I want a movie my children and I can sit down together, thoroughly enjoy, and have an intelligent and thought-provoking conversation after. I want them to love it now, internalize it, and look back on it when they’re 20 and go, “I get it now” in a way they aren’t from the original.

Can we make this happen? Lin, are you listening? Tina? Oprah, want to take the helm on this? Donald Glover? Marlo, want to go a round or two? Let’s show our children they are still free to be them.

Category:
Film
Tags:
movies
remakes
parenting
Heather Jones
Free to Be You and Me