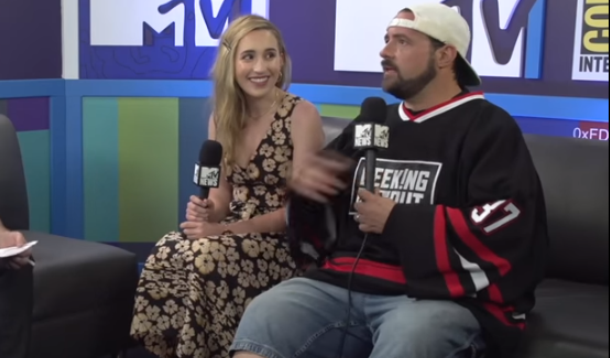 Just imagine your 17 year-old got a message like this from a complete stranger online. Filmmaker Kevin Smith did, and instead of reaching through the screen and virtually strangling the culprit, he took the high road by penning this philosophical message to her haters. And I can't love his words enough.

Trolling is getting worse by the minute, and you don't even need to be a celebrity's kid or an Olympian athlete to find yourself the subject of random online abuse.

It seems crazy that people should get death threats for making bad movies. Leslie Jones, Daisy Ridley... Now Smith's daughter, Harley Quinn Smith, is included in that list for starring in Yoga Hosers.

Newsflash: bad movies will always exist. How is that a crime against humanity? If you want to hate on anyone, go hate on the big production studios for only funding derivative, unimaginative tripe. Or - as Smith suggests - go make something better yourself.

"The best revenge is living insanely well - so if you wanna get back at a 17 year old girl for the grievous crime of enjoying her life, the best way to do it is to succeed in your OWN existence. Show the world WHY we should be paying attention to you instead of anyone else. Because randomly attacking others merely communicates how creatively and emotionally bankrupt you are. You think you have something to offer the world but others are getting all the attention? Don't b--ch or punish the world: just create. Create something nobody's ever seen before and there is a good chance the world will notice you."

The worst part is, so much of the vitriol online is directed at women. Sometimes it's men attacking women; sometimes it's women attacking women. No matter, it's still misogyny. I truly wonder if Kevin Smith himself has received death threats for his slew of dude movies, many of which were cinematic abominations. Doubtful.

If you want to say you didn't like a book or a movie or any "product," go for it. Whatever. That's called freedom of speech, and I can get behind that. It's the first rule of thumb you learn when you take any creative writing class. You can dissect the art all you want, but not the artist. When you attack or threaten the person, that becomes abuse and I see no justification under the sun for that shit.

Now, go forth, people, and be useful.