This Bedtime Hack May Save Your Sanity

Because sleep deprivation is a form of torture 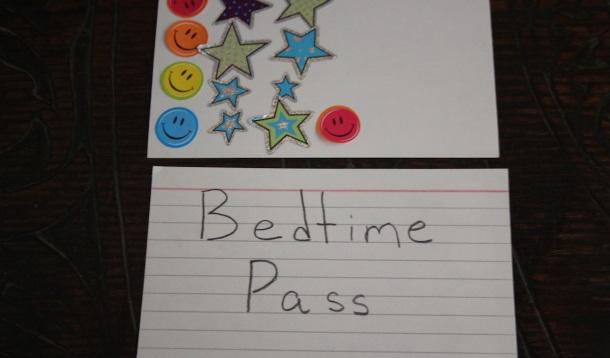 Our little ones are cute. But make no mistake, sleep deprivation is real - real torture, that is. Yes, even when it comes at the hands of people three feet tall.

That's why one mom took desperate measures to address the constant middle-of-the-night awakenings and intrusions in her home.

Jill Robbins had hoped that having her young children share a room would help them stay put through the night. She was wrong.

While her second boy was dream sleeper, her first used literally any excuse to spring from his bed - from "water, hugs, to ask a question about nuclear theory."

Ultimately Robbins got so tired (sorry) of the bedtime dance that she and hubby invested in a king-sized bed. Though she admits to not being "co-sleeping people,” she finally caved and ended up with a packed bed. So much for king comfort.

Worn down, Robbins heard about a little hack known as the "bedtime pass," and within days it revolutionized nocturnals for her family. And if you've ever been sleep deprived (read: had babies), you will know it's no exaggeration to say it saved her sanity, too.

Put simply, the bedtime pass consists of an index card, giving your kid one single excuse to depart the confines of their own bed per night.

It's their shout. It can be used for a nightmare, a drink, a pee. Whatever, but the point is, the "pass" can only be used once and once only.

Robbins claims the hack cuts out a lot of the silly and plain annoying awakenings for things like asking "what flavour yogurt we were having for breakfast or to report their sibling was 'breathing too much.'"

The funny thing is, kids take the pass seriously and end up using it wisely.

You can even add extra incentive for consecutive nights of non-wakenings by putting stickers on the back of the pass, to be traded in for treats. Is it bribery? Yes. Is it effective? Damn straight.

Thankfully my son sleeps like dead. (Seriously not even Armageddon would rouse this kid.) But if he wasn't such a sound sleeper, I would definitely try out the pass because when mommy doesn't get her forty winks, ain't nobody happy.