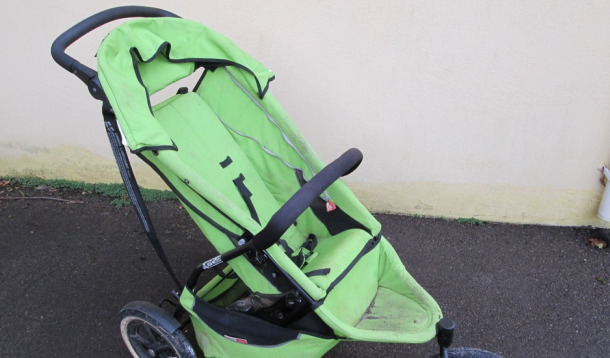 It could well be the most expensive second-hand stroller in the world. The Phil & Teds stroller, aka the "green albatross," has racked up bids in excess of  £150,000 ($282,000) on eBay—and all because a dad-of-three claims the "buggy" ruined his life.

Come again? Yes, the listing in which the British father describes his loathing for the green beast that "signifies everything that ended my happy carefree low-cost child-free life" has been going viral. Trouble is, not everyone sees the funny side.

This Is How You Can Use Your Stroller To Get Fit

In the must-read listing, the dad waxes lyrical about the stroller that cost more than cars and even a house his dad owned once, and now it's high time the albatross goes "round some other poor sods (sic) neck."

Clearly someone out there must appreciate the man's jaded wit because the bids—and the comments—have been rolling in, though the Southhampton-based seller knows there is little hope of it actually selling for such a crazy figure.

At least he's honest: the stroller has, during its lifetime, "had pretty much every bodily fluid known to science, (and several that have yet to be discovered) chucked over it by my children. It's also absorbed its own weight in Ellas Kitchen meals, and mud" and is probably as comfortable as a Model T Ford.

For a starting price of "just £9.99 you too can screw up your life," vows the sardonic seller, who claims he will use the money to "recover" from his children in a method that will likely involve drugs and alcohol. With all the extra cash, he's promised to fund a vasectomy for one commenter and to build "a small but modest man cave for me at the bottom of the garden."

Getting The Big Snip? Here's How To Throw A Vasectomy Party

As eBay listings go, I have to say, it's pure genius. Some commenters sincerely hope the man gets his price in exchange for all the smiles he's brought to disaffected dads everywhere.

Everyone else needs to spend a little time abroad (or at the least, with BBC) to familiarize themselves with Brit humour. Like the perfect martini, it's dry -  incredibly dry.