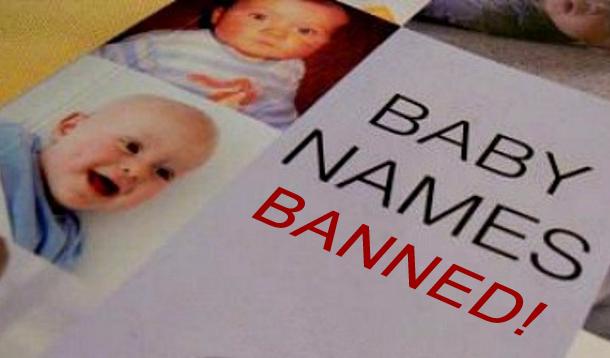 Everyone loves a quirky baby name! But are some names just plain wrong? The New Zealand government thinks so. Henceforth it has taken it upon itself to impose a ban on 77 baby names. That's one awfully long list...

According to an article in Today Moms, the Registrar of Births, Deaths and Marriages deemed it necessary to list certain names that babies just should not have, since the discretion of parents is obviously not always to be trusted.

And perhaps rightly so, since 18 of the names on New Zealand's banned list were actually found on the US database of Social Security Administration 2011. They are, in no particular order of inappropriateness:

New Zealand isn't the only nanny state when it comes to names. Sweden has also apparently restricted the use of Superman and Metallica. Shame. Of course celebs are the worst offenders when it comes to baby naming. Cue Donald Trump's son Barron; Ziggy Marley's daughter Justice; Giuliana and Bill Rancic's child Duke, also a firm favourite with Diane Keaton and makeup giant Bobbi Brown.

“The right to choose a name that reflects your individual and cultural beliefs and values is rooted in the very foundation of America—I can’t imagine the U.S. ever legislating name choice, nor do I think that would be desirable,” said Pamela Redmond Satran, who runs the baby name trend website, Nameberry.

We now know about the very real phenomenon of 'name regret.' Do you think NZ is right to impose the ban, or should parents always have free will when it comes to naming their beloved babes?