My 39th Anniversary of Luck 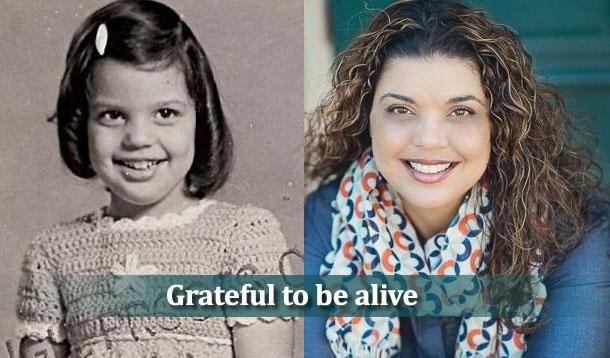 It was a hot, sunny day. The date was June 10, 1975. The little girl was four years old, and was enjoying swinging alone in her backyard, trying to build up the courage to jump out of the moving swing and land on her feet.

She fell, not fully breaking her fall with her hands, and felt her tummy bang against the ground when her knees gave out.

A searing pain ripped through her stomach like none she had ever experienced. She tried to stand up, but the pain was so strong that she doubled over, clutching her belly. She wanted to cry out, to scream for her mommy, but she could see through the slats of the fence that their neighbour was asleep sunbathing next door, and the little girl didn't want to wake her. She ran, hunched over in pain, to the side door of her house and burst through it, where her mother was working in the kitchen. The little girl collapsed, sobbing, trying to explain what had happened. That's the last thing the little girl remembers of that day.

That same little girl remembers waking up in a post-surgery recovery room. Her parents had taken her to the hospital when the pain continued and the colour drained away from the girl's complexion. The doctors assured the parents that she had probably ruptured her spleen in the fall, and that it was a routine 20-minute surgery. Four hours later, they were finally approached by a doctor who told them "You've got one very sick little girl. She'll be lucky if she makes it."

What the doctors found was no ruptured spleen, but a kidney that had been secretly hiding a cancerous tumour, silently growing it without any symptoms. The fall from the swing had ruptured the tumour, thereby rendering her kidney a useless organ requiring immediate extraction. Internal bleeding had required 24 bags of blood transfused, and the little girl was spiking a fever, despite the alcohol rubdowns, flow of orange popsicles and IV drugs she was receiving. To this day, that little girl can't even smell an orange popsicle without feeling sick.

The little girl stayed at a cancer hospital for a month, receiving daily doses of radiation to her abdomen because the rupture of the tumour meant that cancer cells could have moved almost anywhere in her body. The doctors assured her parents that her tiny little pelvic bones were close enough together to form a protective shield for her reproductive organs from the laser of death but sadly, they weren't quite right about that. After the radiation came the chemotherapy. The IV tube would fill, and the poison would flow into her body, bringing with it instant vomiting and nausea that never left.

They let her go home once she learned to walk standing up straight again. Even from home, the parents had to bring the little girl back for regular doses of chemotherapy, the really toxic kind that is not even used anymore because it causes worse cancer years after being treated with it. Always with a bucket and box of tissues at her side on the ride home.

One morning the mother went into the little girl's room to wake her and when the little girl sat up, her hair stayed all over her pillow. It wasn't cool in 1975 to wear funky head scarves, so the parents thought a wig to cover her scalp was the best way to help the little girl. They didn't realize that a little girl of four wasn't capable of keeping a wig properly positioned on her head, nor did they realize that kids are really, really cruel and would tease the little girl when her wig shifted too low on her forehead from her winter hat. Once, the little girl was cornered and forced to surrender her wig for the big kids to play keep-away with while she silently cried, watching. Of course the big kids got into trouble, but that didn't take away the little girl's memories.

Weekly chemo turned to monthly, then that stopped, and the little girl only needed to have monthly blood tests and chest x-rays to see if the kidney tumour cells had relocated to her lungs, where the doctors said they would try to hide. These tests seemed easier than the chemo, but the little girl had no idea how much damage frequent x-ray radiation could also cause.

After a number of months, the little girl was suddenly hit with terrible pains in her tummy again. She was terrified that the same thing was happening all over again, not understanding that this was impossible. The doctors explained that the surgery to remove her kidney had caused scar tissue to form in her bowels and now they were obstructed, so another surgery was required. The little girl had no control over any of this — no control over her body, no control over what was being done to her body  — she was a living science experiment.

The little girl grew up being told how lucky she was. Funny, but she didn't always feel "lucky" at various times in her life when the tentacles of that tumour tapped her on the shoulder occasionally. Times like when she tried for years to conceive a baby, times when she suffered post-traumatic stress, times when she was never able to fight off every cold, flu or virus making the rounds because the chemo and radiation had permanently weakened her immune system.

Yet somehow, after becoming a mother through adoption, that little girl finally did realize her luck — she was alive. She was able to walk, talk, see, hear, think and live, laugh and most importantly — love.

June 10 is my 39-year anniversary of being lucky. I don't know who or what pushed me off that swing, or if it was just coincidence, but I'm grateful it happened because an undiagnosed kidney tumour could have done far worse than what I've endured.

I can only hope to keep celebrating each additional year of luck as I receive them.

Hi! Thanks for reading my story! If you're interested, I also wrote this story about what I did when my first marriage ended, or this story about the time somebody assumed we adopted our daughter to be our maid.

Jackie Gillard: Conceived in my Heart Why Free-Range And Helicopter Parenting Labels Suck