Age Three is the Magic Number

No Fights, No Accidents, No Hovering Parents Necessary 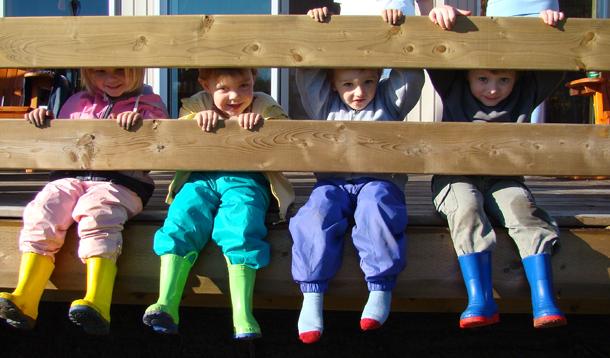 Three, oh, it’s the magic number. I didn’t realize how true those infamous Schoolhouse Rock! lyrics were until a year and a half ago. We had no time to notice it when my first son, Duncan, reached three because we were too consumed with our 9-month-old second son, Griffin. But one day, in the early summer after Griffin’s third birthday, it just happened.

We had another family over to our house, and all of the kids went to the basement to play and we didn’t hear from them until we called them for dinner. DINNER! An entire 45 minutes AFTER THEY ARRIVED! And then, I swear to God, they did it again when we put a movie on after dinner. 90 MINUTES that time! Not a word. Yes, they were stuffed with pizza and each was equipped with a personal drink-box and bowl-o’-snacks for movie-watchin, but still. There were no fights, no crazy accidents - no parental-hovering necessary! All the kids were happy, which meant all the adults were happy which meant we had a great night. And that was only the beginning of our new normal.

What, pray tell, made that night any different than all prior attempts to have a gathering, where adults could fully focus on each other over a glass of wine and not be worried about leaking diapers or dangerous stair-falling? I’ll tell you what it was: the youngest of the children was three, baby! There is a light! You CAN be a normal human being again. One who can communicate with someone wholeheartedly, instead of the one-eye-constantly-watching-the-toddler-almost-kill-themselves-(again)-thus-never-paying-full-attention-to-who-you're-talking-to kind of parent. You know, the kind of parent you despise (or despise being)? Sure, my theory might not be scientifically sound, but here’s my reasoning and why it seems to hold true:

One year olds can’t be left alone since many aren’t even walking and are certainly not aware of any of the dangers that lurk everywhere - and they’re EVERYWHERE – so parents need to hold constant vigil over their toddling babes.

Two year olds are usually pretty preoccupied with making their parents life a living hell with their new-found speech thing (“mine!”, “no!”, and other assorted high-pitched squeals). As well, there’s the incessant control/power-struggle tantrums over everything from naptime to tooth-brushing. Add in the potty-training-chaos that’s likely going on and there you have it: The Terrible Twos.

Three year olds, well, now were talking. When my youngest hit three, he was out of diapers - a HUGE deal for us since we had been changing diapers for 5.5 years. At three, he still played alone really happily but also loved hanging with the older kids. He listened and followed directions and could communicate his likes and dislikes. Most importantly, he was easily coaxed (read: bribed) into things, for example, if you eat your vegetables, you can watch Cars (who cares that it’s for the 896th time, it’s what he wanted).

P.S. I dare you not to sing along to Blind Melons version of the SchoolHouse Rock! song, my inspiration for the piece that I haven’t been able to get out of my head since thinking up this piece last month!

Stephanie Rebot Tarling works full-time in Toronto’s financial district as an associate director of sales, but has a penchant for writing - especially about her family (two young sons and incredible husband) and about WOOTHM (work-out-of-the-home-mom) life in general.