Celebrating Your First Christmas after the Guy in Red Isn't a Thing... 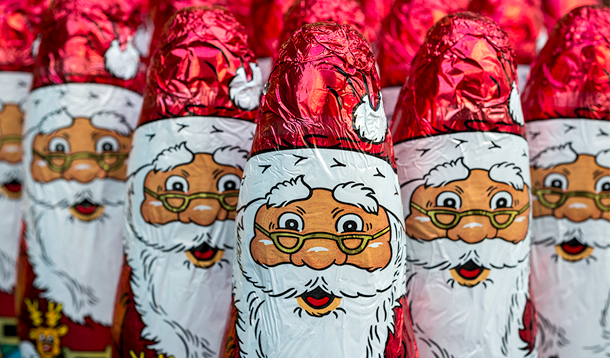 Christmas time is magic. It really is. As I sit here beside a stockpile of carefully curated Christmas gifts waiting to be wrapped, while Josh Groban serenades me with White Christmas, I am as giddy as I once was years before my hair matched the winter wonderland outside.

My childhood excitement over Santa and reindeer hooves on my roof, have given way to the joy of hand-picking – and sometimes hand-making - the perfect gifts for my children, anticipating the looks of wonder on their faces when they descend the stairs and catch that first glimpse of the fully-loaded tree on Christmas morning. It’s a different kind of excitement, but no less magic.

But this year is a little bit different. This is our first year since my oldest son learned the truth about Santa. Shortly before Easter this year, we sat him down and had a heart-to-heart about the Bunny, the Tooth-Fairy, his beloved Elf, and yes, the big man himself.

It was time, it really was. We wanted to tell him rather than have him discover on his own and lose some trust in our word. We figured coming clean would preserve some of our integrity instead of being caught in the lie. And he was ready. He was sad for a moment, but he wasn’t angry at being deceived. He was glad we had given him the gift of ten years of magic, and he excitedly stepped into the role of becoming the Easter Bunny for his little brother.

Still, I wonder if knowing the truth will dull the magic for him just a little this year. I’ve known the truth for decades, and I still feel the magic, but he is in the thick of the in-between right now; still a child, not yet at the stage of creating the Christmas magic, but old enough to know the magic comes from me.

His biggest concern was not that he would no longer receive a gift from Santa. I know a lot of kids hold off admitting they know the truth for fear of cheating themselves out of a gift, but that wasn’t him. He wanted to know if I would still do the things Santa did for him, like making a scavenger hunt, and putting his stocking at the end of his bed while he slept. Of course I assured him I would, and that seemed to reconcile his conflict.

I had anticipated the dissonance of creating magic for a child who no longer believed in the magic. What I didn’t see coming is how apathetic I would become towards Santa in general. With my oldest, we did Santa big time. We went to the mall, we wrote letters, we hyped him up. We had a special Santa at a local farm that we decided was definitely the real one. When my oldest stopped believing, I somehow lost the drive to keep up the Santa excitement. This would be fine, except that I have a five-year-old who still believes.

In fairness, the little one has always, and continues to be a little leery of the man in red. We happened upon him unexpectedly at Toys R Us a few weeks ago, and it took a few rounds of the store before he decided he wanted to approach him, and then only if his big brother came too. And to his credit, his big brother has been great about going along with Santa and helping to create that magic for the littlest Jones. But the magic of Santa has dulled for me this year, seeing my oldest child looking at him, knowing the truth.

Just as one day you realize your parents are fallible, and your teachers don’t live at the school, there comes a day when Santa becomes a memory. I only hope that the memories we gave him of Santa will crystalize as good ones, and that one day, when he is sitting in his bedroom, beside a pile of unwrapped gifts for his children, being serenaded by Josh Groban, he is filled with the warmth of Christmas magic, still active and well inside him.