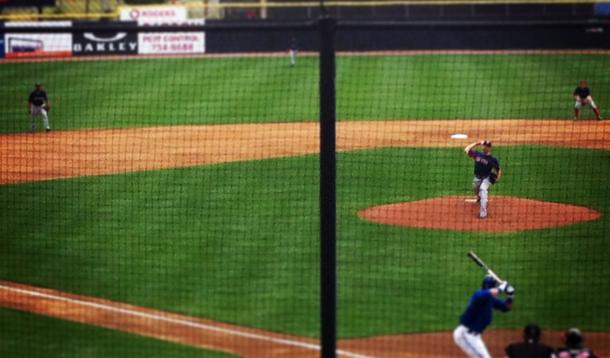 When visiting Dunedin, Florida it isn't difficult to quickly ascertain why the Blue Jays call it their Spring Training home or why Canadians flock to this sunny city on Florida's west coast every year. It's hard to argue with a locale that can have you playing golf on a PGA course in the morning, then visiting with a nearby movie star (Winter the dolphin) before catching a ball game in the afternoon. However, the best kept secret in the Grapefruit League circuit is Dunedin's culinary scene. From steakhouses, to Thai restaurants and Irish pubs, the selection of restaurants in Dunedin seems to defy logic. So many delicious choices in a city whose population just crests 35,000 people. Nestled just north of Clearwater and St. Petersburg, Dunedin certainly holds its own when it comes to the area's food scene. While fine dining is available, there are also a number of excellent hole-in-the-wall foodie stops not to be missed. Spring Training is certainly the height of the tourism season, but the mild weather and fabulous food scene make this an excellent destination at any time of the year. While many people first visit for the baseball, they'll often return home talking about the good eats. 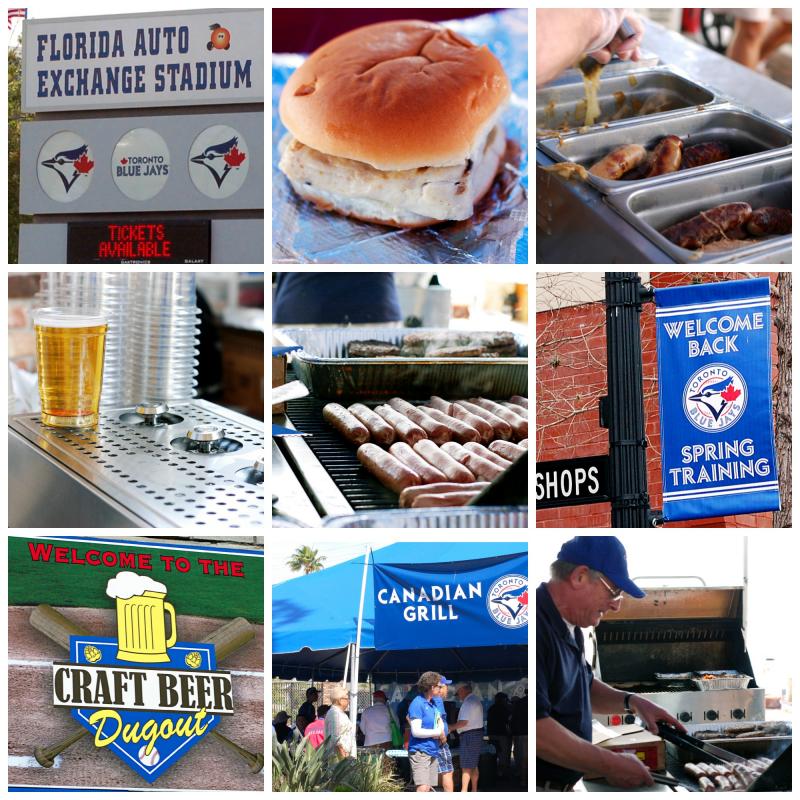 While snow is generally still on the ground in Toronto, Spring Training launches in Dunedin under the Florida sunshine for six weeks every year. The Toronto Blue Jays have long called Dunedin their spring home, and beyond March and April their minor league affiliate the Dunedin Blue Jays continue to run the base paths at Florida Auto Exchange Stadium.

Russ Williams, who is in charge of food operations at the stadium, a Canadian ex-pat ensures there's more than just hot dogs and popcorn to offer fans who've become accustomed to variety and options at the ball park. In his 18th year with the Blue Jays, he's no rookie to the industry, having served time with the Blue Jays minor league affiliate in Medicine Hat as well. Arriving at the stadium at 5am on game day Russ and his son Jay run one of the few baseball stadium concessions not operated by a conglomerate catering corporation. Pausing to check up on his staff before game time Russ quips, "Never trust a skinny concessionaire. He's not eating his own food."
While they don't steer too far from the traditional offerings at the ballpark, as Russ explains "people are always looking to go back to what they know," the popular Canadian Grill tent does offer some excellent options for hungry attendees. Burgers topped with caramelized grilled onions, bratwurst sausage with sauerkraut, and mahi-mahi sandwiches are all gobbled up by the fans.
Russ has his hands full keeping up with the ebb and flow of the season. Whether filled to capacity at 5,000 fans during Spring Training, or on a rainy regular season date with only 500 in attendance, the stadium always has a full food service. Brats and pretzels sell like hotcakes when Philadelphia and NY are in town; but when Minnesota rolls in no one seems to buy pretzels and the meat orders go sky high. Clearly ballpark tastes are highly geographical. For those looking for cold refreshments in the heat, the stadium has a Craft Beer Dugout filled with dozens of micro-brew beers from across the United States. Dunedin also holds the dubious distinction of drinking the most Labatt beer in all of Florida, and the majority of it is sold in a six week stretch each spring.
With a team lineup comprised of future stars and injured big leaguers there is no wrong time to head down to Dunedin to check out the ballpark. If you have some time before the game pop in next door to Marguerita's Cafe for some local hospitality, giant sandwiches, and a drink. 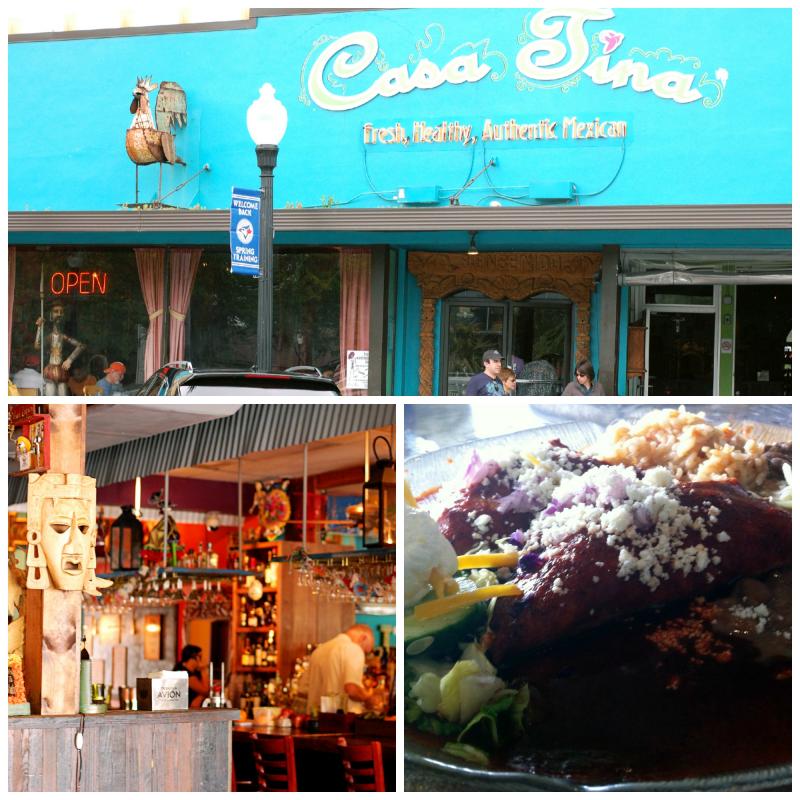 As would be expected, Main Street carves itself through Dunedin with a quaint stretch filled with mom-and-pop restaurants and souvenir shops along the "downtown" core. Across from picturesque Pioneer Park visitors and residents have been stopping in at Casa Tina's for authentic, fresh Mexican food for over twenty years. The busy, eclectic Mexican decor is worth visiting for alone. Packed with religious and cultural symbolism there is barely an inch of space that isn't vying for the eyes' attention. However it's the food at Casa Tina that really steals the show. All made fresh to order, the wait can be a little longer than some may be accustomed to but it is well worth it. Delicious sauces and salsas adorn every dish, and the menu is vast and varied offering seafood, vegetarian or meat options throughout.

For Canadian visitors who are much more accustomed to a Tex-Mex take on Mexican food, Casa Tina's is a culinary delight. Friendly servers are happy to help those overwhelmed by the menu while supplying endless bowls of homemade chips and salsa. Weekend brunch brings with it a whole other selection of house specialties. Definitely worthy of multiple visits! 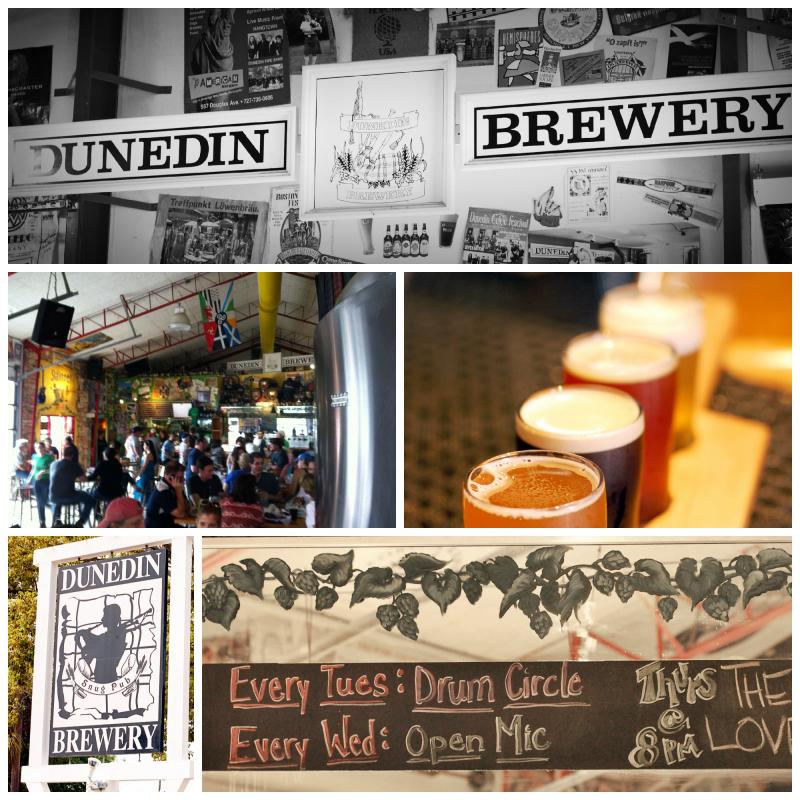 There are many micro-breweries that make delicious beer. Those that don't aren't around long enough for anyone to notice. What really differentiates good micro-breweries from the great ones are the atmosphere of the pub and the vibe of its patrons. In this sense, the Dunedin Brewery stands on a pedestal with few others. Reminding me a lot of the Island Brewing Company in Carpinteria, California, maybe it's the combination of sunny weather, nearby beaches, and laid back owners that combine to make for the ideal brew-pub ingredients. The Dunedin Brewery is packed with locals and tourists simply hanging out and having a great time. This brew-pub has a beer hall and various patios that lend themselves to day-long revelry and relaxation. In business for over 16 years, they are the longest active brewery in Florida and it comes as no surprise. With a music stage for live acts many days of the week the place is hopping more often than not. Brewing beer in 28 barrel batches the brewery can barely keep up with demand. Celebrating at many local festivals you can find Dunedin Brewery at the Highland Games, Orlando Games, Spring Training, and Tampa Bay Beer Week just to name a few!
With good food, good music and great beer its nearly worth visiting Dunedin for the brewery alone. Their bestseller is the delicious Apricot Peach Ale. Not too sweet, fairly hoppy, and incredibly balanced — it's not surprising that it flies off the shelves. A great place to spend the day with friends or to find new ones.
Category:
Life - Travel
Tags:
florida
culinary tourism
baseball. spring training
where to eat in Florida
vacationing
microbrewery
Dunedin
gav martell