Would You Make This Car Seat Exception For The Prince? 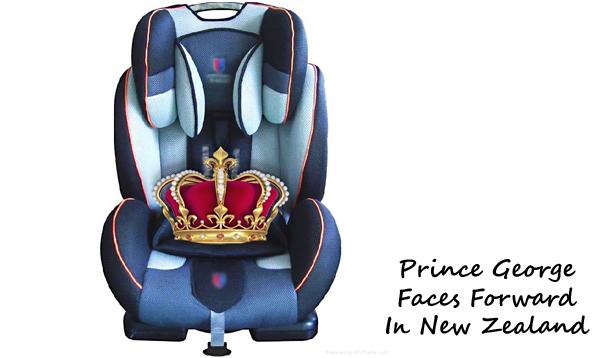 Earlier this week, the Royal family embarked on their first visit to New Zealand together and while the frenzy began due to their travelling together in one plane (direct heirs to the throne aren't supposed to travel together), it sure didn’t end there. Plunket is a very well known support service in NZ that self proclaims to see over 90% of newborns, providing information and support, including child car seat safety. Plunket is even often referred to by the New Zealand Transport Agency with respect to citing the importance of keeping a child under the age of 2 in a rear-facing child car seat. So why all the drama? A few days before the Royal family was to arrive, Plunket released a photo showing their staff installing a forward-facing child seat, intended for children 9 months and above (according to the car seat’s manufacturers) for Prince George—who is a few weeks shy of 9 months!

After all the backlash, Plunket wasted no time in releasing a statement indicating that their “priority is to ensure car seats are installed by qualified car seat technicians to ensure they perform correctly.” As a Certified Child Car Seat Technician myself, I can’t help but think—even when a seat is installed correctly, if it’s not the right type for the child, it cannot and will not perform correctly! Did you know that it's estimated over 80% of child car seats are not correctly installed?

Plunket went on to say that while they “recommend that children stay in rear-facing seats until age two, it is not a legal requirement.” In Canada, the Ontario Highway Traffic Act legally states that a child must remain rear-facing until they’re at least 9kg (20lbs.). Furthermore, Transport Canada requires that a child must be at least 1 year old AND walking unassisted. Often times we are approached by clients with a child over 20lbs but not walking or quite 1 year. Even if they are walking unassisted, but will turn 1 year in a few days, at our shop, we won't install the seat. It's just not worth the risk. It's actually the norm in European countries to keep children well over 2 years old in rear-facing child car seats.

This also brings up the question of jurisdiction. What is acceptable in NZ may not be the case in UK. Likewise, many of us Canadians may drive across the border to the US and they have different regulations as to how a child car seat should be installed (for example, their legal requirement to use a tether is different from Canada's). How is it that all of a sudden when I cross the border, my child is more/less safe?

With respect to Plunket, they went against something they’ve advocated for so strongly and numerously on their website alone. If they're pushing for rear-facing child car seats, how do they decide that for Prince George it's ok to be forward-facing at the parents' request?

What about you? Would you make an exception for the Prince?

Watch our video for tips on Keeping Your Kids Safe In Their Car Seats At Every Age! And read this to find out if Your Car Seat Is Installed Properly.