When is it Time to Talk to Someone? 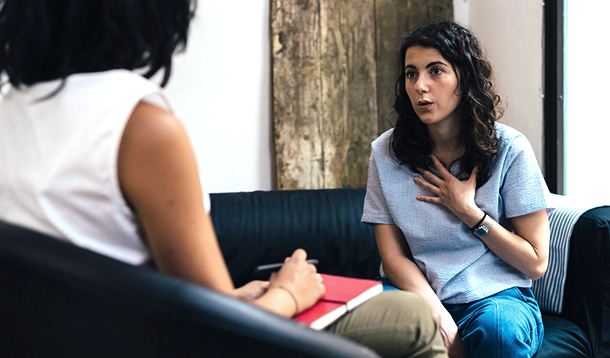 Mental health is one of those things; it’s like, sometimes, unless it’s severe, it’s hard to know if you’re sad or antsy, or depressed and anxious. And, one of the funnest things about anxiety is second guessing what you’re feeling and thinking, over and over and over again.

I guess that’s why, when sad became more than sad, and when antsy and preoccupied became full blown clinical anxiety, I didn’t realize it. “I’m just dramatic,” I’d tell myself. “Everyone must feel this way.” “Who wouldn’t be down after all the crap I’ve been dealing with?” “I am totally overreacting. People have dealt with worse.” “I’m too sensitive.” “I need to suck it up.”

For the longest time, I’d have these internal conversations; a cyclical debate about whether or not what I was thinking and feeling was ‘normal.’

Until, one day, I decided that normal or not, it was officially debilitating.

That’s when I finally talked to someone. It was only when I realized the affect these feelings were having on my everyday ability to function and parent and adult, that I finally decided it was time to do something to deal with it.

Mental health is a funny thing. People can say they’re open to understanding its impact, but if there’s one thing I’ve realized on my journey over these past couple of years, people are really full of shit. They talk the talk but then family will ask you when you’ll be better, or work places demand constant proof of your struggle, as if it won’t negatively impact you to ask. Everyone wants something tangible to hang their hat on.

But mental illness isn't tangible. When will I be better? Don't I wish I knew!

I don’t remember what my tipping point was, when I realized that my sadness and anxiousness was something bigger. Maybe it was when I was asked point blank how long I intended to be in therapy – as if there is some magical treatment that will make it all better with any sort of exact science.

That’s why, when I did the test that gauages your level of depression, I said I felt hopeless.  That’s why I was also diagnosed with clinical depression. That’s why I was finally able to allow myself to not feel like a whiner and a drama queen. That’s when I realized I’m legitimately unwell.

I suffer from mental illness. I’m not brave enough to wave my flag and speak to others from where I am, without the comfort of anonymity. The idea of the world knowing feeds into my anxiety. It makes me worried that people will look at me differently, even though I want them to look at me and say ‘if she can own it, so can I.’

I’m in the early stages of acknowledging how affected I am by the world around me and my ability to cope with it. There is a sense of relief in knowing that there is a reason, beyond me being someone who seems to enjoy their life always feeling like it’s on fire, for why I always feel that it is.

My ability to cope is broken. And the things that have happened in my life took the cracks that were already there and broke ‘em wide open. It was a fault line that was always there, just waiting for the earthquake to reveal it and when the quake hit, I crumbled like a building whose foundation wasn’t built to withstand the harsh elements.

When will I be better? Well, that I don't know. But the first step is knowing that my 'normal' isn't typical. And there are ways to learn to deal with it and manage it. And now that I've acknowledged it, that's what I'm going to do.