Getting Over The Fear Of My C-section Scar 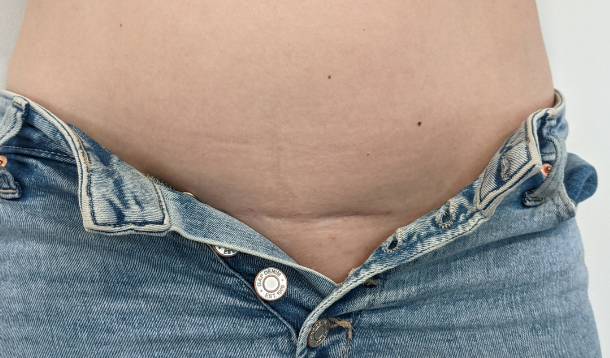 I was born by cesarean approximately 38 years ago. I’ve got lots of quirks and am by no means, perfect but I attribute none of my oddities to the way I was birthed. So when my first pregnancy resulted in a c-section after 24 hours of labour I was totally ok with the outcome. It was an emergency c-section by definition but there was nothing catastrophic about it. I discussed all options with my doctor and it seemed sensible and meant my brother could stop by and meet the baby before he went to work. I’m type A, timing and control are important, so I was happy to be flopped onto the operating table. Honestly, it’d been a long pregnancy, and I was glad to have it over.

For my second baby, we discussed our options with several doctors and made an informed decision to have a scheduled c-section. This time around, with a toddler to manage, the idea of controlling the timing and understanding recovery expectations was even more appealing. My second cesarean went well (aside from getting an email an hour before that our rented apartment was going to be sold and open houses began the following week, but that’s another story.) We took our new baby home two days after surgery. I took it easy as much as I could and I healed slowly, but well. After six weeks I had the standard postpartum check-up and got the all-clear to resume normal activities.

I felt good after my second c-section. I spoke to friends who felt guilt about not having a vaginal birth and I sympathized but I never related. The details of how my babies exited my bodies never felt like an important part of their story. I focused on the parenting decisions I could control rather than the ones informed by medical professionals far more experienced than myself. I returned to occasional jogging and I even hung out on a few trampolines, no issues.

My only challenge was my scar. I didn’t love it. I didn’t even like it. I never looked at it and I never ever touched it. I felt like if I did, my body would bust open and I would bleed out. For months it was easy to avoid as my loose skin hungover and after that, it was high-waisted everything. I didn’t acknowledge the scar.

When my daughter was two and a half I attended Mom Camp, where the Vagina Coach was one of the speakers. She began her talk on pelvic floor health saying, “I bet there are c-section moms in this audience that think this talk doesn’t apply to them.” I literally nodded, thinking, I don’t pee when I laugh, I don’t have prolapse, I’m good. However, I stayed for the mimosas and listened to what the Vagina Coach had to say. As she spoke, I thought about my continence, by definition, the ability to control your bladder and bowel. Anyone who's ever spent an hour with me has waited for me outside a bathroom. But I had never connected this frequent need to pee to my c-sections. At the end of her talk the Vagina Coach urged, “If you have a vagina, you should see a pelvic floor therapist.”

A week later I found that my extended medical plan covered pelvic floor therapy. I was curious about many things the Vagina Coach had mentioned so I made an appointment at a clinic aptly named, the Cheerful Pelvis. I began the appointment embarrassed, confessing I didn’t need to be there and was just mostly curious.

During the consultation she asked a lot of questions, and we discussed my small bladder. During the physical examination, she asked if she could touch my scar. I gave consent and braced myself to bleed out on the shiny white clinic floor. Unsurprisingly, my incision did not burst open and no blood was shed. Her touch wasn’t even painful. The therapist explained there was up to two centimetres of scar tissue built up behind my incision pressing on my bladder, literally making it smaller. She explained that by massaging and stimulating the scar regularly I could break down the scar tissue and expand the space, effectively increasing the size of my bladder. Mind-blowing.

Using a belly butter I began massaging my scar daily. I wondered why, for the 5 years since my first surgery, I had never touched or looked closely at the scar. Although I had no remorse around the surgery, the scar never felt like my own. Moisturizing, pulling and stretching my skin the way the therapist had shown me connected me with my scar as I hadn’t expected. I noticed a difference in the scar and my bladder comfort almost immediately. At a follow-up appointment my therapist observed the scar tissue has shrunk by half with the potential for more. At that moment, I felt so grateful. As a c-section mom, over two years postpartum, I was so glad to be in that therapist’s clinic getting treatment for something I’d considered normal. I was also surprised by how connected I felt to my body, so long after it grew my babies.

C-sections come with a lot of stigma. They’re called unnatural, the easy way out (spoiler, there’s no easy way to birth a baby) and I’ve even heard, not a real birth. A cesarean is major abdominal surgery with potential complications, risks and a serious recovery. And there’s still a lot of mystery around them. Knowledge empowers us to ask questions and do our own research, which is an unfortunate reality around much of postpartum, very little is provided upfront. I never thought my postpartum journey would be ongoing as my kids start school but I’m now realizing it’s ongoing.

Becoming a mother is so much more than how the baby is birthed from your body. Once the baby is out, parenting is where the real challenges begin. I now look at and touch my scar and wonder how the small people terrorizing my home ever fit through that tiny space.