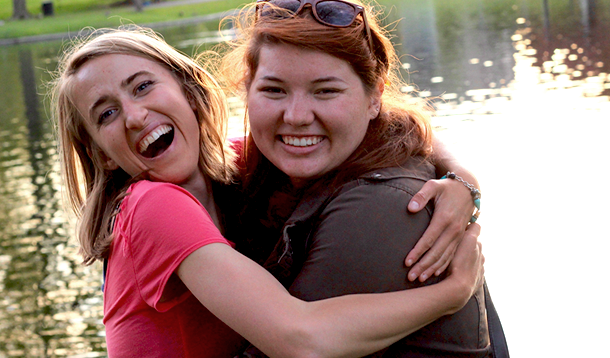 I looked at the clock. I had five minutes before I had to leave to meet my friend at her place. I was wearing the same shirt as yesterday, my “casual” yoga pants, and no socks. I considered being late and taking the time to make myself more presentable – for about half a second, before shrugging and thinking, “Meh, it’s just Genie,” and slipping on my shoes.

I’m an introvert. No, that’s not a strong enough word. I’m a hermit. I don’t like people, or rather, I like people so much that they scare me into not wanting to be around them. I realize my life is sort of a paradox – I make a living sharing my inner-most private thoughts with the world at large, but a chance encounter with an acquaintance at the grocery store gives me heart palpitations.

I value online friendships. They offer me the comfort that in-person ones do not. I once had an in-depth, intensely personal conversation with a very good friend, then saw her at Tim Horton’s a few hours later and legitimately hid so she wouldn’t see me and talk to me. I went to a play and ended up seated next to an editor and friend with whom I speak nearly daily, and was so petrified I pretended not to recognize her – and being the good friend she is, she did the same for me. We laughed about it via Facebook Messenger moments after leaving the theatre.

When I do decide to go out with friends, I require careful thought and preparation beforehand. I straighten my unruly hair. I put on make-up, a bi-yearly occurrence. I fret and over-think. I make everything as perfect as possible before meeting with these people, even though they are my friends.

But not with Genie. In the ten years that Genie and I have been friends, she has seen me laugh. She has seen me cry. She has seen me braless, and sockless, and, after a moment of ill-advised impulsivity, hairless. When Genie asks if I want to come over, whatever I look like is how she gets me. And I don’t worry about it for a second.

I don’t know what it is about Genie that makes me let my guard down. She isn’t my only close friend. She isn’t the only friend I trust with my words, or my secrets, or my heart. I am an open book with many, but I am only an open door with Genie. It isn’t that I think my other friends would be critical or lose respect for me if I showed up at their house in my “true form” – my friends are not assholes. But my social anxiety prevents me from ever trying it with them in the way I do so effortlessly with Genie.

Popularity is a big deal with kids, and indeed many adults. It’s something I struggled with growing up as a child with few friends. I hoped my future children would be well-liked. Now, my hopes for them have changed. I no longer wish for them to be popular. I don’t care if they are given a string of high fives walking down the hall, or if they are invited to birthday parties every weekend.