That Time My Daughter Told Me She's Having Sex 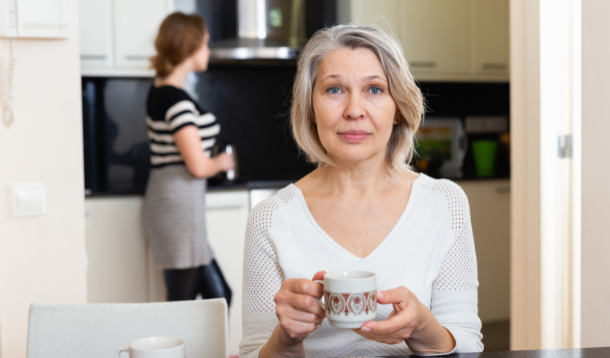 The moment we give birth, our lives get complicated. Some memories stick better than others. This is what I say to myself when I try to remember why I came home later than usual that day. Perhaps I was at an audition. Maybe I was on set. It was during my acting days, not that that really has anything to do with this memory except it would explain why I had come home late and was sitting at the table by myself, after warming up a plate of leftovers in the microwave. The sun was setting, the house quiet.

Then my daughter, 16 years old at the time, came into the kitchen and plunked herself down with me at the table. We were chatting about everything and nothing until the words came tumbling out of her mouth like a heavy bag of marbles. “I had sex and I like it.”

During the next few seconds, a few things happened very quickly. Yet I can still see the scene as though watching a row of perfectly lined up dominoes topple each other over one by one.

First, the insides of my stomach had a heart attack. Then, my soul left my body for several seconds. My daughter, who I realized was waiting for a response, said, “Ummm … mom?” I then scooped up the biggest pile of mashed potatoes I could possibly gather onto my fork and shoved it all in my mouth. As she leaned in from the edge of her chair, waiting for me to speak, I nodded my head and pointed to my mouth as if to reinforce what I had always taught her: that you don’t speak with your mouth full of food. My goal was to buy time so I could gather my composure while at the same time regather all the little pieces of me that had scattered into the corners of the kitchen. Unfortunately for me, it doesn’t take a lot of time to eat a shovelful of mashed potatoes. There’s just not that much chewing involved.

Finally, when I knew that I had exhausted every possible excuse for pause, I put down my fork and said, “Oh. Wow. Well. I’m so glad you’ve come to talk to me about it.” Except so glad may not have been exactly what I was feeling at the time. I was still processing the shock. In hindsight, I can say with 100% confidence that I AM happy she came to talk to me about it. I believe – or perhaps hope – that it means she trusted me and wanted to share an experience with me.

Before I go on, I want to give you context. She had been seeing her boyfriend at the time for about a year. I was friends with his parents, and he was a good boy. Polite. Hygienic. All the things a mom wants from the boy her daughter is having sex with.

The one thing that I remember going through my mind that day was how different we were, my daughter and I, and the relationship we had compared to the relationship I had with my mother. Not to take anything away from my mother and her parenting style. It was simply a different generation.

When my hormones started driving my decisions, I didn’t turn to my mother. Instead, I made an appointment with a doctor to get a prescription for birth control pills. This was important to me because a few years prior to my hormones coming out of hibernation, a friend of mine had gotten pregnant and I didn’t want the same thing to happen to me. We were in high school at the time.

Not yet of age for my driver’s license but old enough to make my own doctor’s appointment, I remember sitting in the waiting room, wondering how I was going to get the courage to say out loud – to an adult – what I had come for. I imagined that the doctor, a woman, would jump out of her chair and ask for my mother’s phone number. I imagined that she would need her permission. I imagined her calling my mother with me sitting in her office and hearing my mother yell from the other end of the phone line. I imagined that I would never be able to show my face in public again.

None of that happened.

In fact, the doctor was very casual about it. Perhaps it was because of the way I looked down at my North Star running shoes as I whispered, “I’d like a prescription for the pill, please.” I was afraid that someone sitting in the waiting room just on the other side of the doctor’s office door would hear me.

Fast-forward to several years later and now I’m the mother of a 16-year-old who is telling me that she had sex AND THAT SHE ENJOYED IT. Instead of going behind my back as I had done to my mother, my daughter was very frank about her new interest. A different generation and definitely a different personality.

Did I handle the news well? I believe I did. I was quiet and let her speak and hardly cringed as she shared with me how it all started. And then I asked her if she was using “protection” and her answer (of course!) told me that this was one area of her life that she didn’t need me as a mother. Except maybe just to listen as she shared her experience.

To this day, I can’t eat mashed potatoes without thinking about that conversation and how our lives get complicated the moment we give birth. Except usually, we don’t realize just HOW complicated until much later. Like about 16 years later.