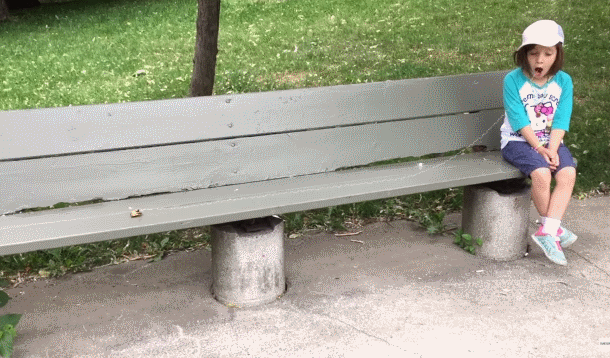 How else could you describe a father who takes his daughter to a public park, ties dental floss to her face, then uses her as bait to attract wild animals? It sounds sinister at first, but it's just the setup to a very adorable tooth pulling video.

In "A World First - pulling a tooth using a LIVE SQUIRREL!", six-year-old Mila Freiheit and her dad David perform the world's first recorded squirrel-based tooth extraction. Using a piece of granola bar as a lure, they tied dental floss to a super loose tooth, and waited.

It didn't take long for the famously friendly Westmount Park squirrels to take the bait early one Wednesday morning, just in time for Mila to go to school for a particularly bloody show-and-tell.

Everyone knows about the old door slamming technique, but the Freiheit family's video got me thinking about other weird ways to pull teeth. If you're like me, then you still have nightmares about all your teeth falling out, and many kids are understandably nervous about losing their baby teeth.

Tooth pulling is always a good chance to remind kids about the importance of taking care of their teeth. Among adults, 79% of us have some kind of dental erosion, and the Journal of Public Health Dentistry says soft drinks and soda are the #1 cause of tooth decay.

So if you need creative ways to pull teeth, then consider some of these bizarre stunts...

As if we needed another reason to be grateful drones didn't exist a generation ago, dads can now pull their kid's teeth via unmanned aerial vehicle. David Freiheit, yes, the squirrel dad, helped pioneer this trick as well.

The squirrel tooth pull was actually the second time in a year this Montreal father-daughter team went viral for their bizarre tooth pulling antics. In an earlier video, Mila opened wide while her dad pulled a baby tooth with a drone. The drone camera gives you a great angle from the tooth's point of view.

If, like me, you easily fall down the Youtube rabbit hole, then you'll find tons of videos of kids (mostly boys) pulling their own teeth with heavy duty Nerf guns. It's harder than it looks, apparently.

If pulling a tooth with a wild squirrel is too much for you too handle, then you can always turn to the family dog. If your son or daughter is close with the family dog, then this can have the added benefit of calming them down during a stressful situation. Simply loop dental floss around the loose tooth, then tie the other end to the dog's collar.

From another room, have someone else call the dog, and pop goes the tooth!

In the southern U.S., certain families have a tradition of something called "The Redneck Tooth Pull," in which loose baby teeth are tied to the end of dad's pickup truck. While you can use just about any kind of vehicle to pull this off, it might be safer to stick with a remote-controlled pickup truck. If your son or daughter feels up to it, then can even handle the controls themselves.