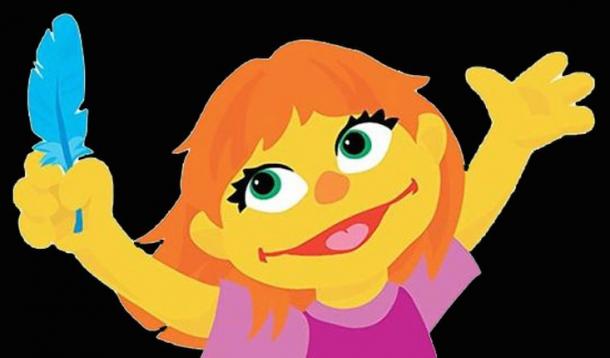 Every parent knows that the best babysitter for their kids is the TV. Sit them in front of it, turn it on, and let it educate them. That’s why it’s so dangerous when the seemingly innocent TV shows you trust to raise your children are bought and sold by special interests looking to push their corporate agendas.

Recently, Sesame Street announced they are adding a new character to the show under the guise of acceptance and diversity. This insidious character hides behind a sly smile and a love of fluffy puppies and cotton candy. She may look like an innocent little muppet girl with yellow skin and green eyes, but underneath her colourful facade, she is a paid shill for Big Pharma.

That’s right Big Pharma, one of the many Bigs of the world who control our every move, sap our children’s minds, and fund the Illuminati or the Bilderburg Group, or something. They’re powerful OK! They have a secret handshake!!

Big Pharma, as I’m sure everyone is aware, is part of the global scheme to inject everyone with alien DNA to help pre-colonize the globe for the arrival of the terraformers in 2020. The X-Files reboot coming this January? That’s a documentary.

How does this conspiracy work? As usual, the anti-vaxx community has all the facts on this bombshell. First, Big Pharma pays off the Children’s Television Workshop (doesn’t the name just scream evil mastermind corporation?) to plant their new character, Julia, into the show. Julia has autism, and of course we all know that autism is caused by the flu shot. How do we know this? Duh, a former Playboy Playmate told us so. Oh, and Donald Trump too.

That’s good enough for me!

So where was I? Oh, right. Now that autism is cool, thanks to Julia’s love of butterflies and the colour pink, everyone will get the flu shot. Aside, from significantly lowering their risk of getting the flu, the shot also hides the alien DNA that, while horribly disfiguring, will also help us all survive the harsh new climate that the colonists from Kepler–452b will be creating here on Earth.

Sure, you say, but isn’t it a good thing to teach kids to respect the differences of others? Maybe this new Sesame Street character is a good thing? Well, technically the Keplerians don’t speak out loud like we humans do; they are a telepathic species. So, Julia’s autism is really just paving the way for mass acceptance of mental telepathy. So in a way you’re right. Julia is paving the way for us to better accept and understand our new overlords. LONG LIVE KEPLER!

Since I’ve blown the lids off this conspiracy – I’ll be black bagged any minute now – I might as well let you in on the other co-conspirators.

Cookie Monster: Totally a puppet of Big Sugar. The colonists of Kepler–452b are a insect-like species, and they love sugar. So ensuring that the North American food chain is dominated by high-fructose corn syrup is simply another element of the grand scheme.

Oscar the Grouch: Big Oil. Oscar’s love of garbage and destroying the planet’s ecosystem are really just early precursors to the eventual terraforming of the planet.

Snuffleupagus: Clearly Snuffie is a pro-GMO poster boy. I mean look at him? This elephant-grizzly bear hybrid is a weaponized muppet of death just waiting to be unleashed on the unsuspecting population to help crowd control during the pre-colonization panic. Why do you think only Big Bird can see him? He’s a spook.

So there you have it: the conspiracy laid bare for all to see. Join the resistance! Fight the future! And smash the oligarchy by refusing to let your kids be part of the grand plan. Boycott Sesame Street and their agents of death, and instead let you kids watch old rerun of Looney Tunes.

Bugs Bunny is a patriot.

Spencer Callaghan: Fight for your Right to Potty Can We Raise a Generation of Girls Without Fear?