Seriously, she the freakin' protagonist 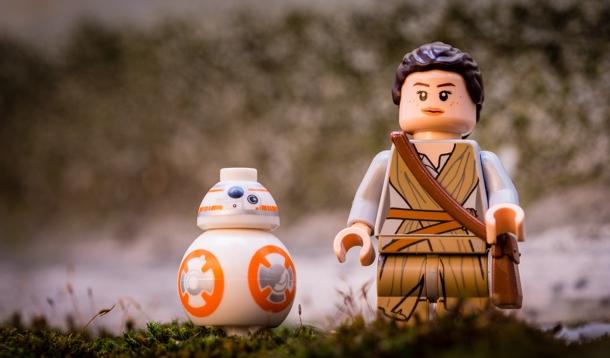 As a dad raising two girls, I’m always on the lookout for opportunities to broaden their perspective on gender. I try not to get militant about it, sometimes pink Lego is just pink Lego, I firmly believe that while equality is essential it doesn’t mean everything has to be the same. Opportunity is what matters.

I try to be understanding of the fact that sometimes bad decisions are made with the best of intentions. Sometimes perceived gender slights are just remnants of old ways of thinking rather than conscious efforts to exclude.

So it is with this reasoned, rational perspective that I have to ask one question. One question that began as a mere curiosity in the toy department but has grown into a full fledged crusade.

WHERE THE FUCK IS REY!?

Seriously, what the actual fuck Disney? I mean I gave you a pass when Hasbro released a version of Star Wars Monopoly that featured Darth Vader (who’s only appearance in the new movie is a melted goalie mask) but not Rey. Maybe it was an oversight, perhaps you hadn’t seen the movie and just assumed that the girl character couldn’t possibly be the freakin’ protagonist! Fine, no problem, mistakes happen.

Thing is, I’m starting to get the impression that it wasn’t just a one-off mistake. Despite only having seen a few select clips from the movies, my daughters are starting to get into Star Wars. I’m not sure where they picked it up but it might have something to do with the lightsaber and force power duels I have with them on a weekly basis. The Force Awakens comes out on DVD April 1 and I’m absolutely buying it for me…umm them. The old movies are great, I love that my daughter knows who Princess Leia is, and the fact that she’s a badass, but having a female protagonist is something completely different. Not only will seeing Rey kick ass help cement their love of Star Wars, but it will reinforce the idea that girls can be heroes too.

So while J.J. Abrams and his writing staff deserve a lot of credit for the movie, when my girls go to try to recreate that sense of adventure in their play they will find their options severely lacking.

I was at a local store on the weekend and the only Rey focused item I could find was a tiny Lego set. It featured Rey and her speeder and was by far the tiniest box in the display.

It seems like Kylo Ren is getting a lot of focus in this round of toys, and while the idea of the villain being the star goes back to the days of Darth Vader, in no way is Adam Driver with his luscious hair and emo brooding anywhere close to that cool.

The fact that this is even a concern is mind boggling. Even looking at it from a non-gendered perspective she’s the fucking main character! This isn’t some supporting role or token female we’re talking about here, this is Ripley from Alien, Katniss from Hunger Games, or Sarah Connor from Terminator. These aren’t shrinking violets; these are strong, kickass women who save the day! How is this even a debate?

Look at the movie poster. Who’s in the middle? Rey. In the end scene of the movie, who is passing a lightsaber to Luke freakin’ Skywalker (who may or may not be her dad)? Rey. Who defeats Kylo Ren, everyone’s favourite Darth Vader wannabe? Rey.

Even if you have boys at home this should be an issue for you. Would it alarm you if your son was playing with a Rey toy? Would it be a problem if the idea that girls could be more than just princesses was reflected in the toys he interacted with?

The worst part is that this situation comes from two brands that should know better. Disney has gone to great lengths to promote empowered girls. From their amazing Dream Big, Princess campaign, to their new wave of empowered heroines like Anna and Elsa, Disney seems to understand that the days of being defined by who you marry and what dress you’re wearing are over.

Star Wars, on the other hand, was groundbreaking in 1977 with its depiction of a space princess who not only didn’t need anyone’s help, but could kick some serious ass of her own. Though Princess Leia is often criticized for the gold bikini scene (she was undercover!), the role became a turning point for strong female characters. Through the work of J.J. Abrams, Star Wars broke even more barriers with more diversity than ever before in a movie of such magnitude.

So what the hell happened?

Look, I get it, Disney and Star Wars licence the brand and characters to toymakers so they are not responsible for the oversight right? WRONG! Star Wars literally started the movie merchandise revolution with the original movie. It is said that George Lucas made more off toys than he did off the actual film. So this is a franchise that takes merchandising very seriously. Just as I’m sure there are very specific guidelines as to how to represent Mickey Mouse on merchandise (probably why I’ve never seen Mickey Mouse branded condoms), it would be pretty straightforward for Disney to write some basic guidelines into their contracts with toymakers. Something along the lines of please don’t neglect the main character of the movie would probably cover it, but I don’t think it’s too much to ask for something more explicitly progressive.

Here’s the thing, I love Disney and Star Wars, and I rant because I care. I’m upset because as a parent and a fan I hold them to a higher standard, one that typically is met without much hassle.

The fact that my girls can grow up idolizing strong female characters in films is partially due to the actions of Hollywood powerhouses like Disney, Lucas Films, and franchises like Star Wars that broke barriers.

If toy makers can’t wrap their heads around the idea of a female main character, Disney should be handing out their lucrative merchandising contracts to companies that will give their films and characters the respect they deserve.

Spencer Callaghan: Fight for your Right to Potty Mandatory Change Tables in Restaurants is Not the Answer