When Mommy Drinks Too Much

is it wine o'clock yet? 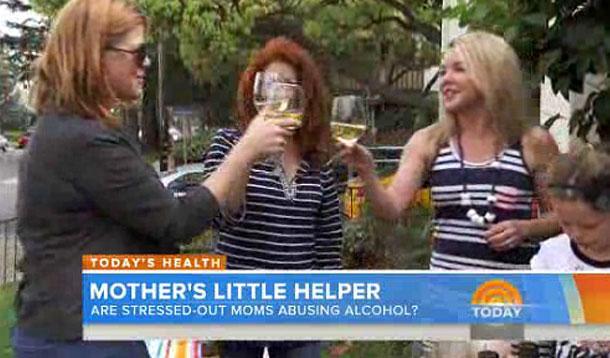 As busy moms, we joke about it. Is it 'wine o'clock' yet? we say. But a survey by Today has found that our drinking habits are no laughing matter.

It's not uncommon for playdates to involve mommies uncorking a special juice of their own. Experts are concerned that blowing off a little parenting steam is turning habitual for many moms, putting both them and their kids at risk.

RELATED: Are We Creating A Culture of Mombies?

Of those polled, almost 40 percent use drinking to help them cope "with the stress of being a parent." Interestingly, a third of respondents regarded at least one of their mom friends as having a drinking problem. (So we are likely pointing the finger at each other.)

Mom of three Stefanie Wilder-Taylor is one of those moms whose habit shot up to six glasses of wine a day.

“All of a sudden I was like, I don’t have an off switch,” said Wilder-Taylor whose a-ha moment came after she drove drunk with her kids in the car.
Sober for almost five years, Wilder-Taylor wants women to look in the mirror and admit it if they need help.

Are boozing mommies an acceptable social norm? Do any of your mom friends drink to excess?
So, you like your wine... This reveal may persuade you to cut back.

This trend in women's drinking has us genuinely worried.