Everyone needs a soft place to land 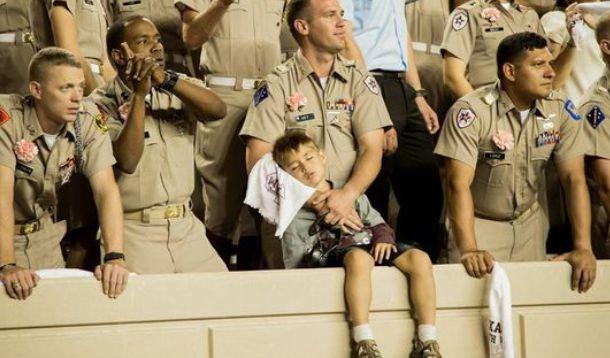 A viral photo of 28 year-old Kevin Ivey and his six year-old son Calvin in the stand at a Texas A&M football game earlier this month has a heartwarming backstory. It’s not just because the adorable Calvin is snuggled and fast asleep in his dad’s arms (oblivious to the ruckus) or even that Ivey isn’t your typical college student (he served eight years in the U.S. Marine Corps).

It’s because Ivey sees the men with him in the photo as family. When Ivey was honourably discharged from the Corps earlier this year, it was just him, young Calvin, and his dual cab pick-up truck. When he enrolled at Texas A&M with his schooling paid for by the GI Bill, Ivey was still a Marine on a limited budget without the cash to pay the deposit required to move into an apartment, and the father and son duo were living on a shoestring:

"We had money for our bare necessities and that's it," Ivey said. "Hotel money just wasn't in the budget."

And so it came that by July, Ivey and Calvin found themselves sleeping in their truck in a parking lot on campus. Ivey, whose time in the military included tours in Afghanistan and Iraq, didn’t find it that bad.

Anyone who's been away to school, or had a young child - or tried to manage both at once! - can imagine how difficult all these changes were for this veteran and his young son. But Ivey isn't a complainer and like so many parents, he just saw what needed to be done and did it. But even those who just plow through deserve support in difficult times. Ivey says:

"I guess I've shared a truck in Iraq and Afghanistan with three or four other guys, so, I guess for me, it really wasn't that bad. (Calvin) had the whole backseat and I had the front seat. So I can't complain," recalled Ivey.

But when three university police officers knocked on his truck window one night, Ivey’s life took a surprising turn. The officers were military veterans themselves, and sympathetic to the young dad's plight.

"We decided to all chip in some money to get Kevin and son a hotel for the night. We offered the hotel to Kevin and he quickly said he did not want charity or a handout. We told him it was neither of those. It was fellow veterans taking care of another veteran in need. As a veteran family, we have given so much for our country. If we can't at least take care of each other, how can we expect others to help us? I specifically told Kevin that he was now joining another large family, the Aggie Family. I'll be damned if I let another veteran Aggie go in need without me trying to do whatever I can to help them."

The next day, Ivey and his son found an apartment and he credits the support of the Texas A&M community for his “soft landing.” Often veterans have trouble settling back into their family lives when they return from a military tour, and like so many others, Ivey’s relationship suffered - and ultimately ended - when he left the Marines, leaving him a single dad without a support system of family.

They don't get any cooler than this 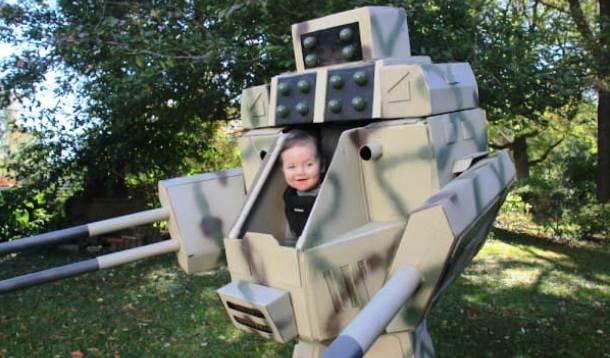 Halloween with babies and toddlers can be difficult to navigate. They're too small for independent trick or treating, but the constant doorbell ringing and strangers at the door can be upsetting at bedtime. And then there's the fact that babies are just plain super cute dressed like fall vegetables and miniature superheroes and it's a damn shame not to share that fun with the world.

But one Dad made the best - the absolute best - of the situation and constructed what is likely the most creative baby or toddler Halloween costume seen to date. 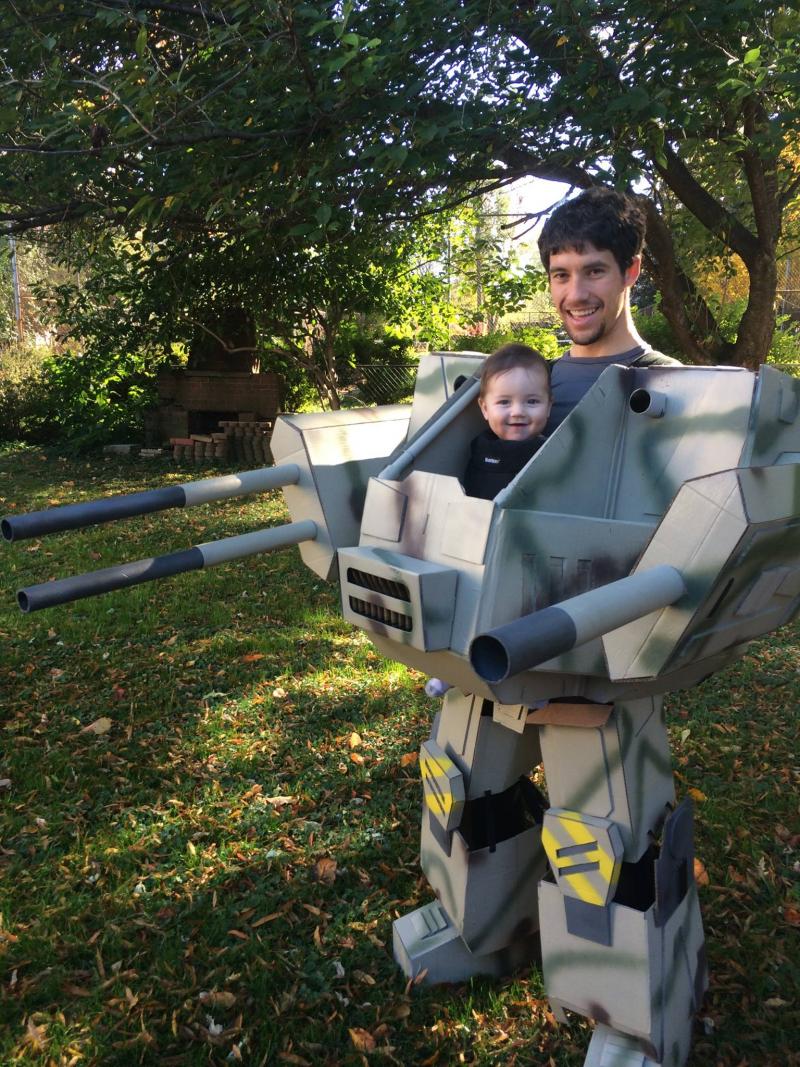 Baby sits inside, seemingly independent of any apparatus, when really, he's safe in a cozy baby carrier, kept warm and protected by dad. The costume was completely homemade and planned far ahead of time  - the baby's mother says her partner had this in mind since before they even had children!

"Ryan built a frame for the body out of PVC and wrapped a cardboard shell around it and secured it to the frame with zip ties. He then cut and sculpted the other pieces out of cardboard, with some foam board details to add a true 3D effect. The legs are supported by a belt, which is hidden under the body. His arms slip into the gun pods and he has more Velcro straps on the inside in order to hold them. The feet just fit over his shoes by gluing toilet paper tubes on the inside to take up the extra space."

What a great way to mesh the celebration and fun of Halloween with creativity and artistic ability.

RELATED: 5 Must Have Items for a Mom's Halloween Wardrobe 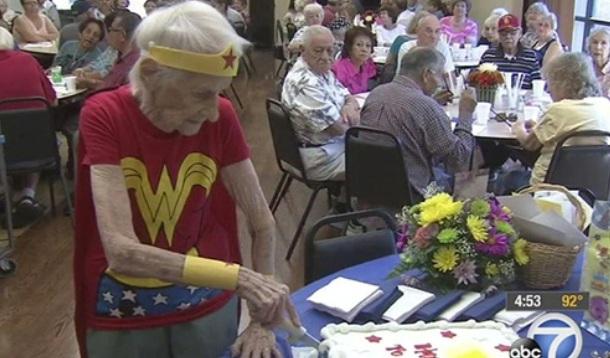 We all like to think we're good people; that we're someone who gives to others when called upon, quick to say "yes" when favours are asked, expecting nothing in return. But I'll say it: I'm 42 years-old and in that time I've said "no" to more grade three school field trips than I can count, and I admit to hiding when people come knocking on the door for bottle drives. So basically, thank God there are people like Mary Cotter, a 103 year-old woman to take up our slack.

Mary is a senior citizen (x2!) from California who recently celebrated her 103rd birthday at the Montclair Seniors Centre, and she dressed like Wonder Woman - a fitting costume - since she's not a resident at the centre, but a volunteer.

That's right; Mary spends her days - after driving her car from the home where she lives in independently and alone - volunteering at the centre doing things like, you know, pouring coffee for young 'uns of 78 or 90. The staff and members of Montclair honoured Mary for her long time service and friendship with a Wonder Woman costume and party where Mary proclaimed the secret to longevity is "keeping busy." (At least it wasn't "exercise" and "abstaining from alcohol;" I'd be screwed.)